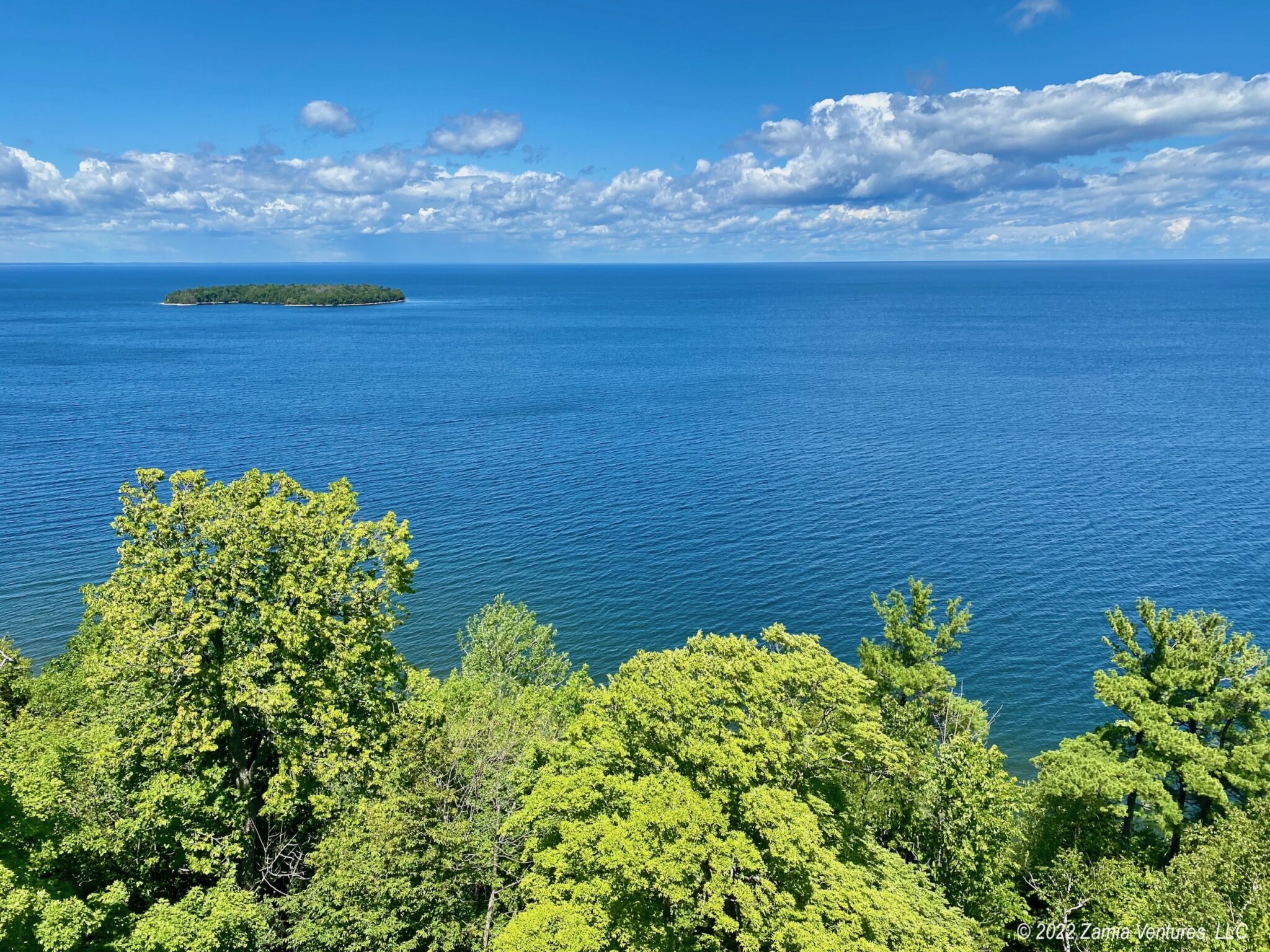 The historic town of Green Bay sits at the southern end of one of the largest arms of Lake Michigan, and near the base of the Door Peninsula with its hundreds of miles of shoreline. So we knew this would be a perfect location for taking in scenic lake views. Right?? Well, places have a way of surprising us, but the search is half the fun.

We rarely go wrong checking out local greenspaces, and Green Bay was no exception. We stopped by the compact lakefront campus of the University of Wisconsin – Green Bay to check out the arboretum that rings the campus. There are six miles of trails covering different terrains, and it’s impossible to get lost. The only problem? Despite being directly adjacent to the Bay of Green Bay, the campus has no water views! Areas directly along the water as well as higher elevation spots were both so heavily wooded that there was no chance to see the lake. 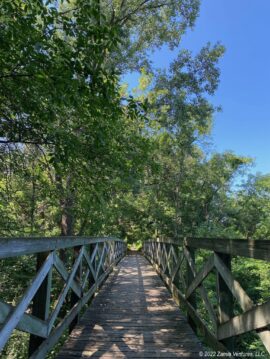 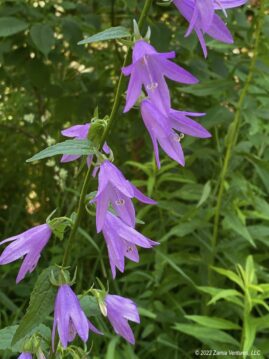 Flowers on the trail 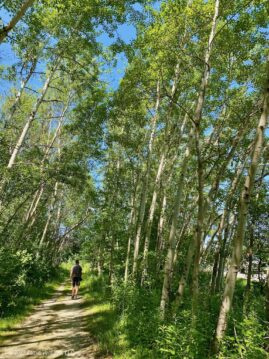 Another morning we visited the Bay Beach Wildlife Sanctuary, a 600 acre public park filled with ponds, marshes, and habitats for injured wildlife. The sanctuary is home to a fairly array range of species from grey wolves and cougars to chipmunks and skunks, including birds ranging from bald eagles to tiny songbirds. The permanent residents are either ex-pets or too disabled to survive in the wild, but plenty of “wild” birds have also figured out the benefit of hanging around and begging for corn from visitors. The turkeys, sandhill cranes, and ducks all seemed pretty normal (i.e., aloof), but the legions of geese throughout the park were the calmest, most serene geese I’ve ever seen. They didn’t fight over the corn, they didn’t seem concerned about kids running right up to them, and they barely vocalized. Maybe all those mean, ill-tempered geese we’ve encountered were just hangry. 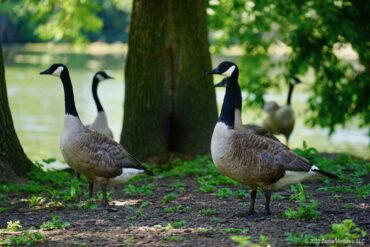 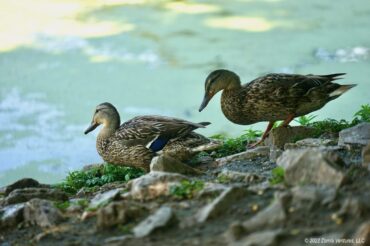 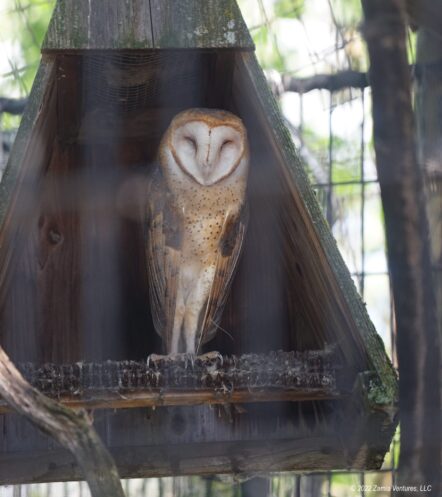 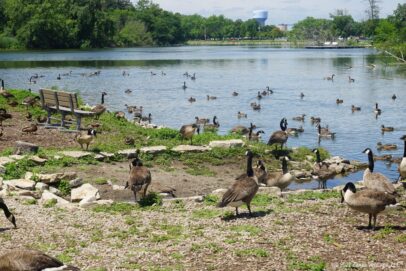 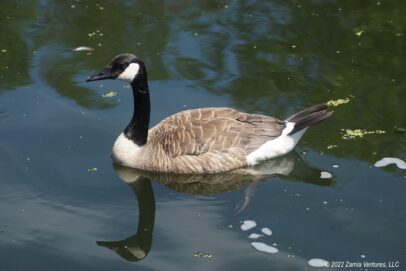 We also made time to visit the most sacred site in Green Bay: Lambeau Field, home of the Packers. We didn’t spring for any of the various ticketed tour options (minimum 55 minutes) but it was fun to walk around the stadium and soak in the ambience. The stadium sits in the middle of a residential neighborhood, and the owners of the modest ranch homes across the street from the stadium show their Packers pride with huge lawn decorations, painted fences, and highly decorated outbuildings that appear to serve as game-day party centers. Only a true fan would have a 10-foot-tall replica of the Lombardi Trophy in their back yard. While in the area we checked out TitleTown, an entertainment complex next to Lambeau Field with shops, restaurants, and plenty of Packers-themed parks and play areas. This is the home of Hinterland Brewery, where we were once again impressed by the skill demonstrated in the wide variety of offerings. We thought the beers were good through not quite as strong as at 3 Sheeps in Sheboygan, but I do have to give them credit for their creative Saving Gracie Hazy IPA — it’s gluten-free yet actually tastes like beer, a remarkable accomplishment. 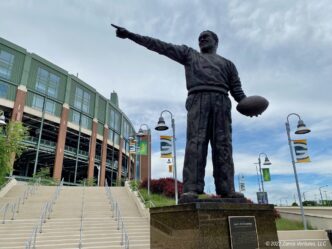 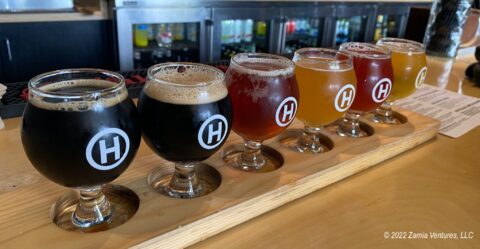 On a hot day when we needed an air-conditioned activity — how far north do we need to go to turn off the A/C??? — we visited the National Railroad Museum. This was a free visit thanks to the ASTC Passport Program which offers reciprocal access to members of science and technology museums, and while we are not train enthusiasts it was well worth the few hours we invested. The permanent collection is mainly focused on two different aspects of trains: locomotive technology and the passenger experience. Most locomotives were powered by steam, and the museum did a good job explaining the tradeoffs involved in increasing power to achieve higher speeds or travel through mountains: more power means a larger boiler, which means less maneuverability on tight curves and also requires a larger tender car with fuel and water. The museum has examples of locomotives with many different clever solutions to the puzzle, but I was mostly just awestruck by the colossal size and complexity of these machines. The museum built handy platforms alongside the trains, and it was particularly interesting to peek inside the cabs of the locomotives to see just how many knobs and controls were involved in generating that immense power. In passenger train technology, we most enjoyed seeing an original Pullman sleeping car. It was fun to see what constituted the height of luxury a century ago, and it was in keeping with our summer theme of civil rights. The signage did a good job of articulating how A. Philip Randolph’s Brotherhood of Sleeping Car Porters played a crucial role in desegregating the labor movement and fighting for equal wages. Some of the other unique rolling stock on display included a headquarters train used by Eisenhower as Supreme Allied Commander in WWII, a hospital car used to transport patients to the Mayo Clinic, and a (failed) experimental Aerotrain designed by GM in the 1950s. 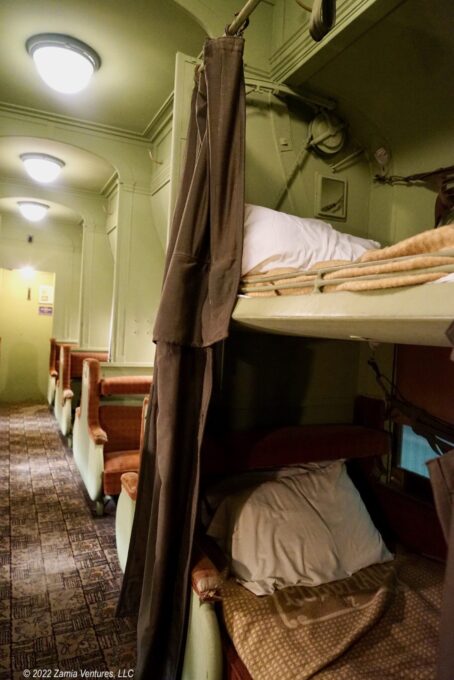 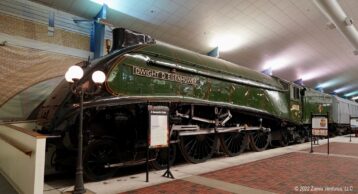 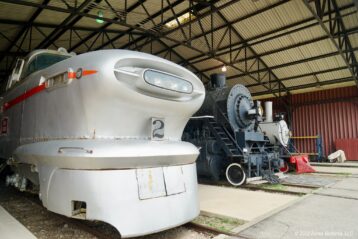 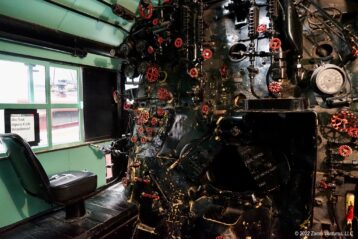 Inside the cab of the Eisenhower

In the main hall

Up the Door Peninsula

Our campground was on the northeast side of Green Bay, making it a perfect jumping off point for day trips up the Door Peninsula. Surely traveling up a peninsula famous for its scenic coastline would give us the lake views we were craving. We took advice from friends Eric and Laurel, who just wrapped up a week in the area, and tried a few different hikes. At Whitefish Dunes State Park, the green/yellow/red loop took us through some nice forests with delicate ferns, but virtually the only views of the lake were at the beach access points by the parking lot. It’s almost as if people are trying to hide the lake here! We finally found the lake views we were searching for on the treacherously rocky and root-filled Eagle Trail at Peninsula State Park. The trail ran right along the edge of the water, affording views of both the rocky escarpment that makes up the west side of the Door Peninsula and the rocky shoreline. No one twisted an ankle and plenty of nice photos were taken. Success! 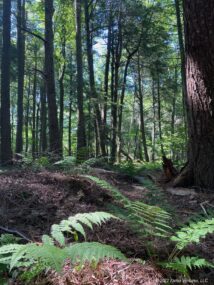 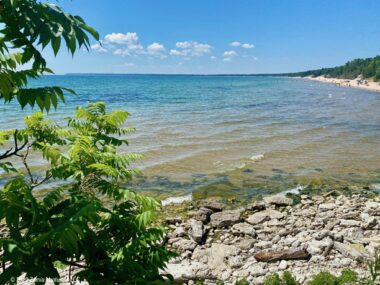 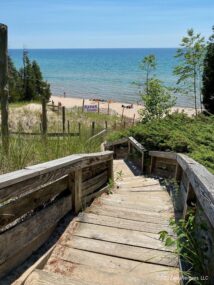 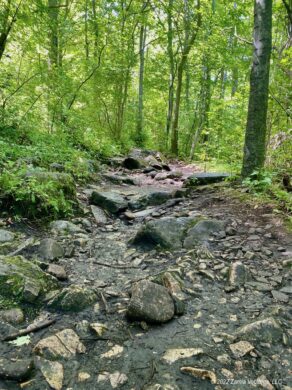 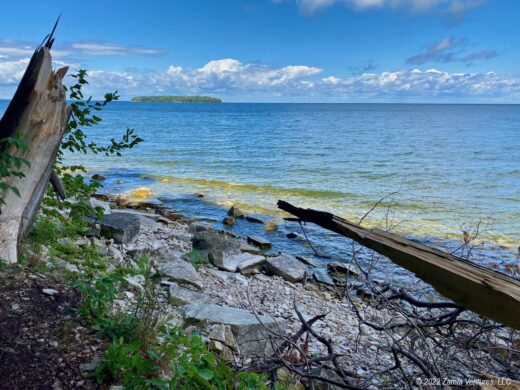 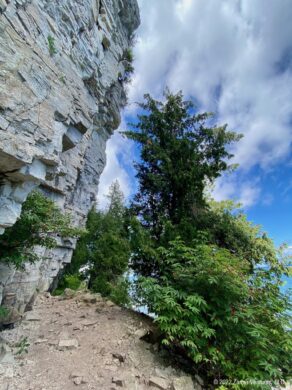 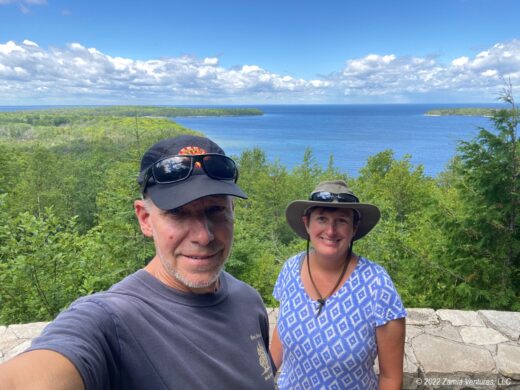 The Door Peninsula is a popular vacation destination, and the busy little towns like Fish Creek and Egg Harbor reminded us a bit of the towns on Cape Cod. The difference here is that the towns are surrounded by farms, complete with cornfields and classic red barns. We got sucked into the tourism vortex and visited a few of the spots that seem custom made to appeal to weekend visitors. Harbor Ridge Winery was a nice change of pace from all the beer we’ve been sampling, but it was soon apparent why Wisconsin wine is not something you see touted in gourmet magazines. Most of the juice is imported from other growing regions and it’s probably not the highest quality raw material. I mean, 90% of the wine we drink comes from cardboard boxes and even we were not impressed. Still, the flights were priced affordably and the shaded patio was a lovely place to relax after a hike. We also stopped in one of the ubiquitous cheese shops to sample the wares and pick up some interesting local products to enjoy later. 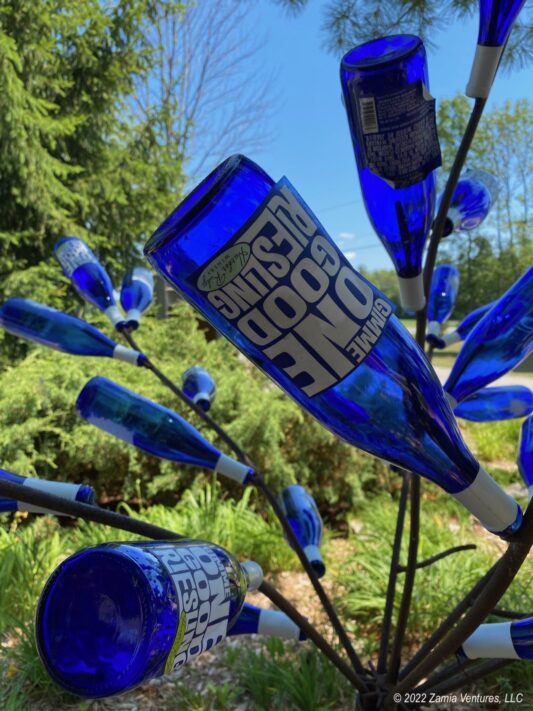 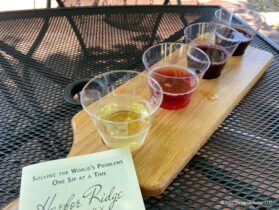 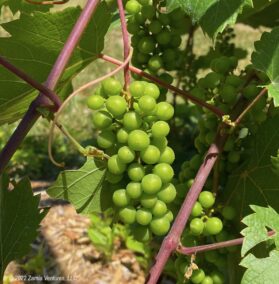 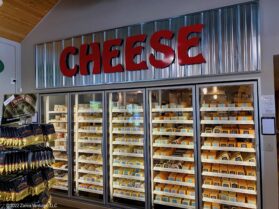 Luxurious Life on the Road

In our pre-pandemic travels, when we took a full two years to circle the country from Florida to the west and back again, we sacrificed some creature comforts in order to experience wild and remote places and also to stay on a budget. We dry camped (camping with no hookups, making our own solar power) about 25% of the time, which means no frivolous use of power like watching TV. We were often in remote places where internet was poor to nonexistent. We missed out on cultural and social events ranging from the Macy’s Thanksgiving Day parade to regular reading of the news. We didn’t feel totally deprived because we were seeing so many jaw-dropping places, but it really did feel like a sacrifice at times. 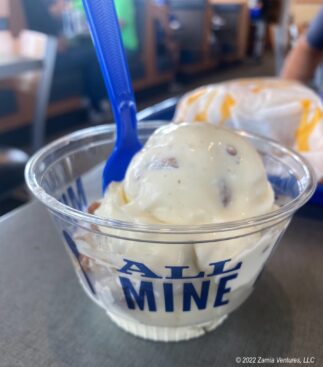 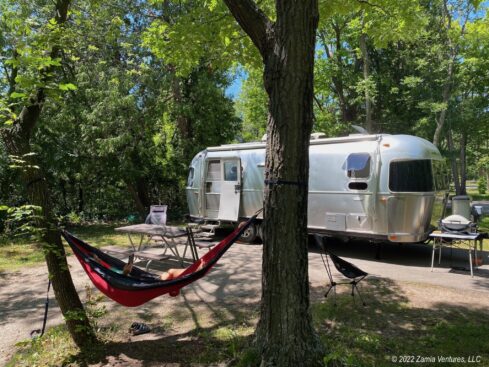 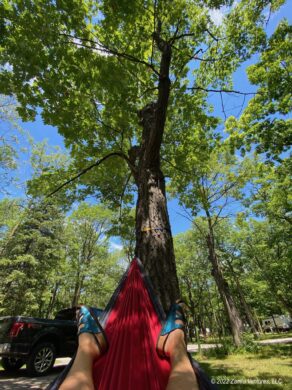 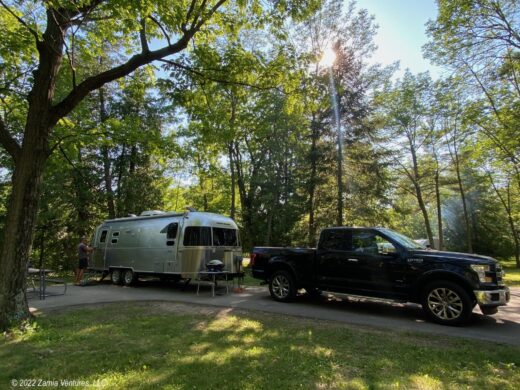 This trip is completely different. For the most part we are staying in pretty developed areas, and we’ve arranged our campsites to have at least an electric hookup at every spot. I’ve been happily doing my Washington Post crossword puzzle every day and watching TV in the evenings. Our stay in Green Bay featured blazing fast internet speeds, so we streamed a show we’ve been meaning to watch for a while. And high quality over-the-air TV meant that we could enjoy watching the 150th Open at St. Andrews. Add in a trip to Costco (their well-priced gas is a life-saver!), downloading new books to read, a visit to Culver’s to try the frozen custard, several trips to Meijer (like Super Walmart but nicer) for odds and ends, and this stay quickly becomes the opposite of deprivation. It’s a different style of travel for us — one that will definitely be reflected in the cost figures at the end of the summer — and we’re still evaluating the pros and cons.

Bay Shore County Park is located right along the Bay of Green Bay (good luck finding a water view, however) and offers sites with water and electric. Although there are quite a few sites, and they were full on the weekend, spots are well-staggered and feel fairly private. We had a bit of road noise from the highway leading up to Door County, but it was a small price to pay for the excellent internet service from the nearby tower.

Next: We leave Lake Michigan for a while to explore our second great lake, Superior. See you in Duluth!

Slowing Our Roll in Madison, Wisconsin

6 thoughts on “Looking for Lakes in Green Bay, Wisconsin”