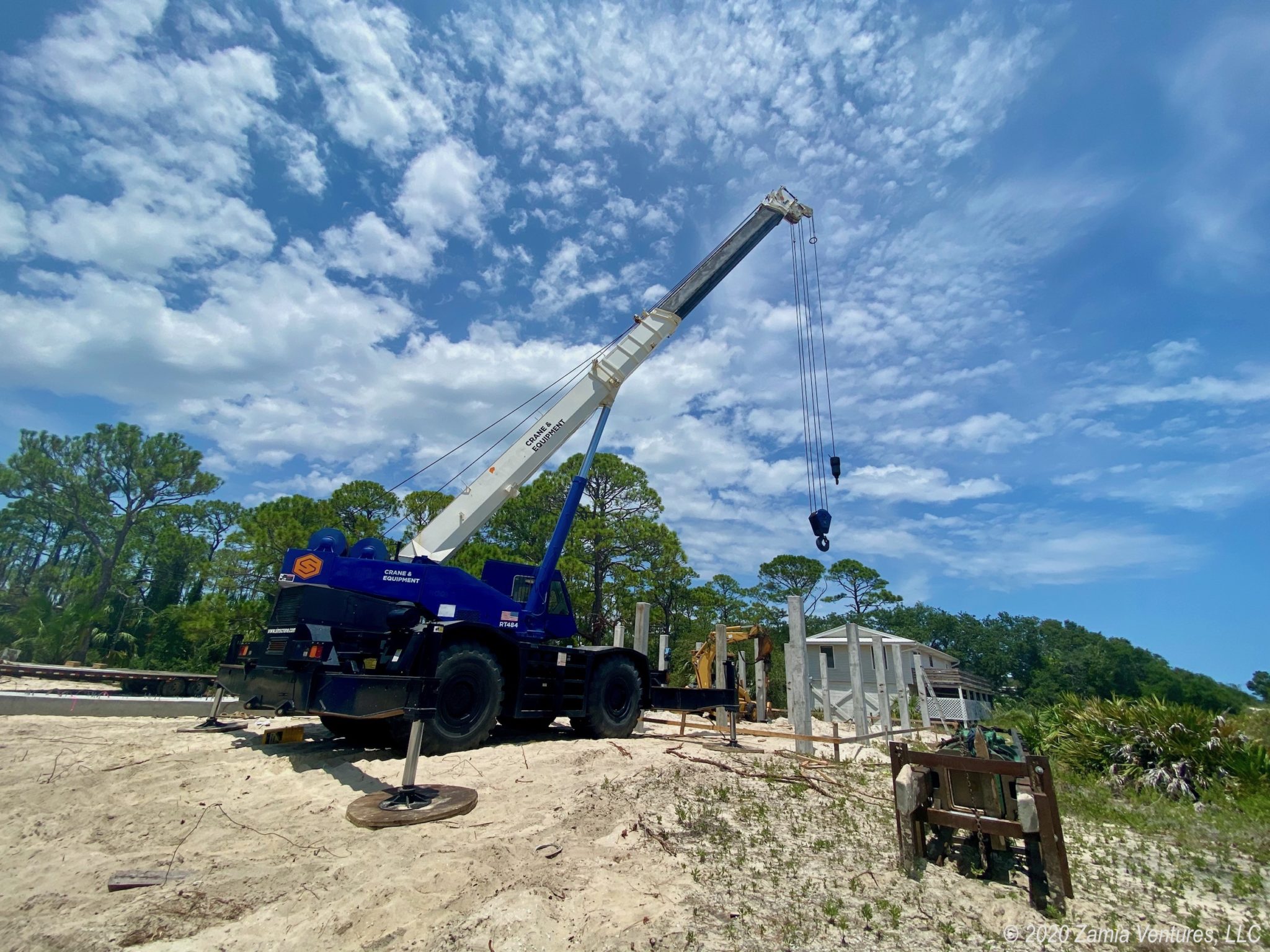 We’ve been here for months working on our future house, and it’s finally time to talk about construction, y’all! That’s mostly because we finally have photos of something other than an empty lot to share. We lived in Florida for years but never this close to the coast, so coastal construction has been an education for us. The three South Florida counties (Miami-Dade, Broward, and Palm Beach) adopted stringent building codes after Hurricane Andrew blew through in 1992, and as residents of several of those counties we were certainly aware of the heightened measures required by the codes. We were also intimately and painfully aware of the dramatic differences in insurance rates paid on homes built under the old vs. new building codes. We assume those insurance pencil-pushers know a thing or two about expected losses, and always felt comfortable living in homes built under the latest and greatest codes.

It took a few decades after 1992, but eventually the rest of our great state realized that hurricane risk is not limited to South Florida, and the stringent hurricane building codes now apply statewide in all coastal areas. Our construction project on the slim barrier island of St. George Island puts us directly within one of those coastal zones where homes must be designed to withstand very high winds (140 mph in our case). Add in the fact of being in a flood zone (again, barrier island) and our project brought us into an entirely new territory of design requirements.

To make things even more interesting, we had also never designed a house completely from scratch before. We hired an architect who focuses exclusively on coastal residential construction, but even with his wealth of experience we needed to take the lead on making key design decisions. We quickly discovered that starting with a blank slate gives us way too much opportunity to be creative. For us, the process was basically a version of the events of If You Give a Mouse a Cookie. It was the very definition of slippery slope.

A small example: We love cooking on propane in our Airstream, and we had gas service at the last sticks-and-bricks house we owned. There are no gas lines on SGI, but there are local propane companies that will fill home tanks. So of course we penciled in the idea of an exterior propane tank. And once you are planning to sign up for regular propane deliveries, the next obvious question is what other appliances might be suited for gas. How about a tankless water heater? What about the clothes dryer? Literally every decision can turn into an endless rabbit hole like this.

Our land was raw land, which also gave us a blank canvas to work with. We considered many different options for siting the house (and future pool!). Setback requirements and our desire to save as many trees as possible provided some constraints, but even so we considered many different options for how to locate and orient the house and driveway. Just figuring out the stairs was a project. 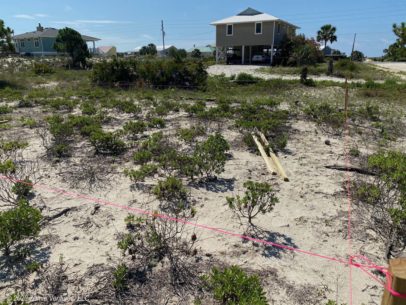 Laying out the location of the house with string 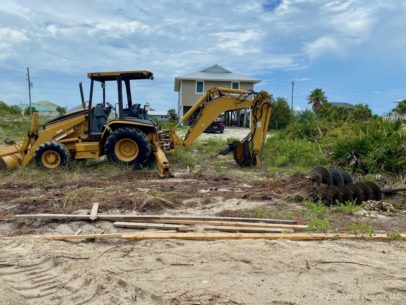 Why are stairs a big deal? Well, our flood zone is AE13, meaning that we are required to have our lowest finished floor at least 13 feet above sea level. Our lot is 8 feet above sea level, so in theory we could put the house on 5 foot pilings and meet code. But once you are planning to lift the entire house onto pilings, you might as well make it high enough to use the area below the house as a carport. And once you’re going to park a big truck under there, you might as well have room for an Airstream. And if the Airstream is going to be parked for the winter, you probably want to be able to get up on the roof and do repairs/upgrades while it’s in the shade under the house. And who knows what other recreational toys might be in our future? The cookie thing strikes again. The end result of this process is that our plans call for 14 feet of clearance between our future slab and the bottom of the concrete girders supporting the house.

So we need a way to get ourselves from ground level to our doors that will be 14 feet in the air. That’s a lot of stairs. Moreover, the building code only requires one set of stairs, but I have seen enough documentaries about the Triangle Shirtwaist Factory to know that we need two. So that meant figuring out what locations made the most sense for these large banks of stairs to start on the ground floor, and enter the house at the second floor. We have seen plenty of local examples of stairways that are oddly placed or detract from the appearance of the home, so we took a lot of care in resolving this three-dimensional design problem. And of course once you’re doing several sets of stairs it’s a good time to think about placing utility rooms underneath the staircases, right? 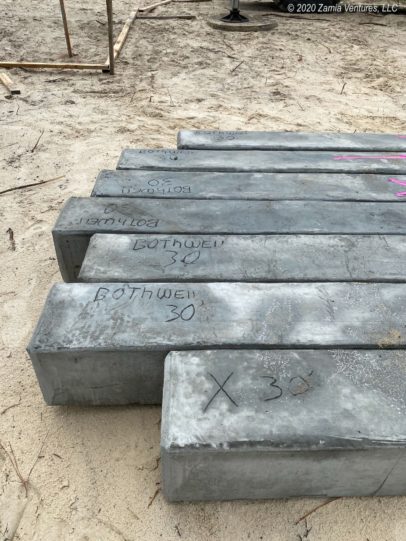 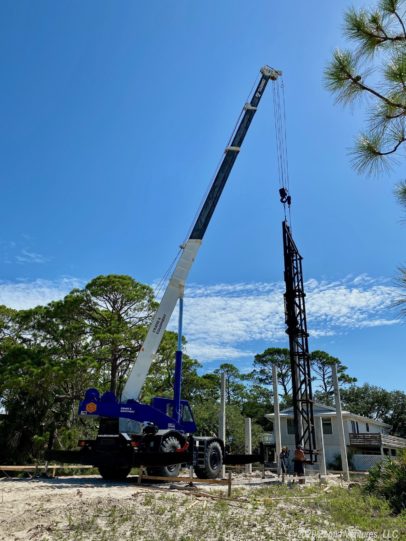 Pilings being driven in

We worked on the plans very deliberately to make sure we were comfortable with the important design decisions. It felt like a major victory when we completed our plans, but of course that is just the beginning of the construction process. Once the plans were final it took several weeks to get health department approval of our proposed septic location and then eventually our building permit, which then started the clock on our biggest timing challenge: pilings.

The pre-stressed concrete pilings and girders are a long lead time item in coastal construction because they are custom fabricated based on the house design. And they are expensive, so it makes no sense to order them until the building permit is in hand. In our case, the fifteen pilings are each 30 feet long with just over half that length (16 feet) driven into the sand.  The girders span the pilings like the Greek letter pi (Π) and are bolted into the pilings. Those girders have huge bolts embedded in the concrete that point upward, where our eventual floor trusses will be bolted down. All those connection points are part of hurricane readiness.

Hurricane winds are so powerful they can lift thousands of pounds of roof off a house like a hat flying off a person’s head on a windy day. A hip roof with no eaves provides some benefit by offering no lip for the wind to grab, as the colonizers of Caribbean islands discovered centuries ago. In modern construction the philosophy is to bolt down each element of the house to the one below, instead of merely relying on gravity to hold them down. 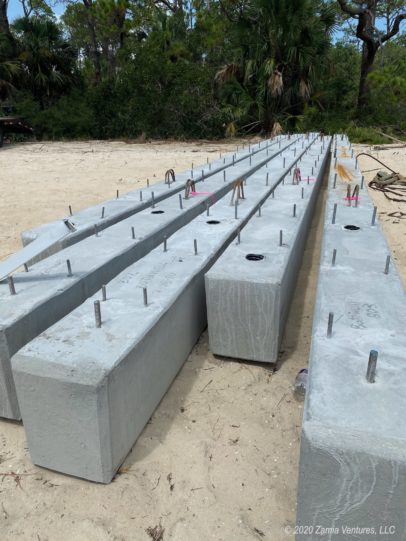 Concrete girders will support the house 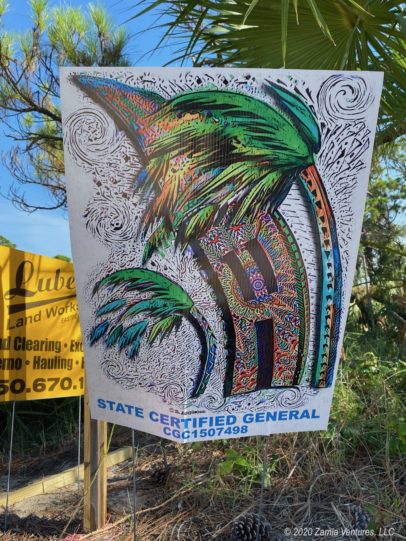 Our builders knows about storms!

One of the reasons we selected our builder is that he knows about wind, as he advertises on his signs. One of his points of pride is that he completed construction on a home in St. Maarten just weeks before the island was devastated by Hurricane Irma in 2018, and the home came through the storm completely unscathed. We’d like to have the same level of security, but also large windows and good views. So basically we are looking for a bulletproof bunker that is also open, airy, and full of light. We’ll see how this works out.

At least we are underway with the project. It was quite exciting having giant equipment working on our lot, especially since we just dropped by and didn’t spend hours listening to the machinery at work. Happily we already made nice with the neighbors who had to put up with several days of the ear-splitting sound of pile-driving. Now that our pilings and girders are in place, the rest of the construction schedule can start to be filled in based on availability of various contractors. It will be a long slog but it feels good to see tangible signs of progress.

We Are All Strangers in a Strange Land, Longing for Home