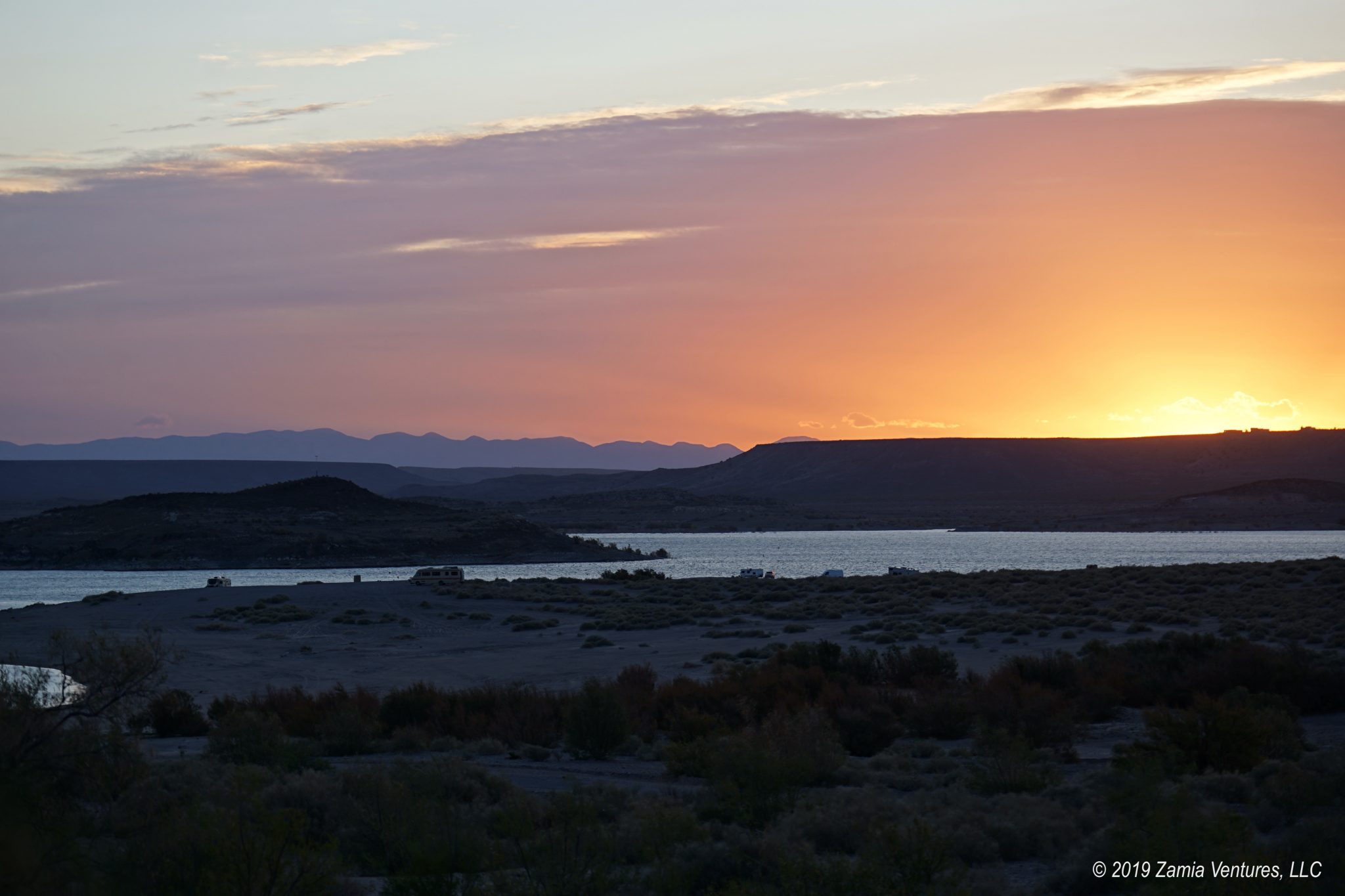 After our stop at the Very Large Array we returned to the Rio Grande Valley. This ribbon of green has always been, and continues to be, the main artery of life through the very arid New Mexico desert. Proceeding south along the river via I25, our next stop was at a state park situated along the banks of Elephant Butte Lake, a large lake created by damming the river.

Have Internet, Will Work

With electric hookups and reasonably fast internet service, it was a week of IT successes. I finally finished cleaning up the broken links and missing files on the blog that resulted from my disastrous hosting conversion in mid-September, and I made several adjustments to the front end and the back end of the site. We upgraded our Apple products to new operating systems and started learning (yet again) all the quirks that come with new interfaces. I spent a bunch of time cleaning old apps and data off my hard drive, in order to make more room for my rapidly-expanding photo library (45,000 pics and growing). We did preliminary research on our travel destinations for next summer and starting plotting the next phase of our adventures. We did quite a bit of detailed research on places we’ll be visiting this winter to firm up our plans and objectives. I finalized arrangements for a trip to the East Coast in mid-November. We reviewed our investment portfolio and YTD tax situation and made several of our small annual charitable contributions. I got a flu shot at Walmart. In other words, we did many of the normal life activities that it is so easy to put off when the excitement of full time travel beckons. We even took time to step back and have several discussions about our long-term travel and lifestyle plans. When not “working” we had plenty of time to enjoy some of the local sights.

The town of Truth or Consequences (familiarly known as T or C) is probably most notable for its unusual name, which was the result of the town taking up the challenge of a popular radio program called Truth or Consequences. By changing the town name in 1950, T or C earned annual visits from the radio host which turned into an annual Fiesta celebrated the first weekend in May featuring illustrious guests like the Hatch Chile Queen.

T or C has the ultimate western town atmosphere. The downtown area has long dusty streets that seem very empty. It has weathered storefronts that make one wonder whether the business inside is actually still functioning. A few tumbleweeds rolling down Main Street would not have been out of place at all. In my mind I could practically hear the title music from The Good, The Bad, and the Ugly playing as we ambled down the mostly deserted main street.

We first stopped by the visitor center for the nearby Spaceport America, which turned out to be one room in a building that also houses a more general local visitor center and a library branch. The first purpose-built spaceport for commercial space flight has been a huge boondoggle, with hundreds of millions of taxpayer dollars spent on building the facility (which is located on public land) but very little in the way of activity or revenue from tenants/users other than a few test flights by SpaceX. Finally, almost ten years after the Spaceport opened, primary tenant Virgin Galactic announced this summer that it is finally ready to commence flight operations from the Spaceport. The main attraction of the visitor center in T or C is a film showing the types of commercial space activities that the state hopes will eventually be taking place at the Spaceport. Not surprisingly, the film is basically an advertisement for the commercial tenants at the Spaceport. We chose not to shell out $49.99 per person to tour the actual Spaceport facility since, as we understand it, the tour basically consists of showing a very pretty but mostly empty hangar. 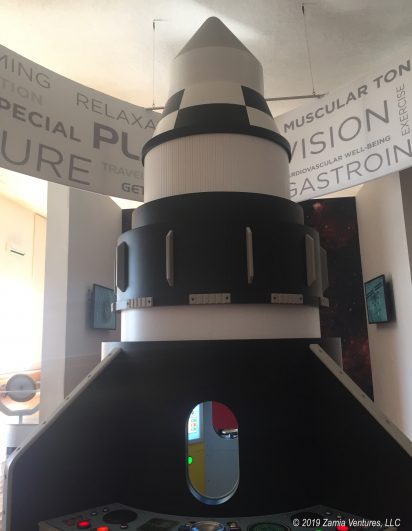 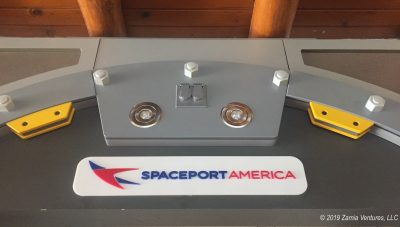 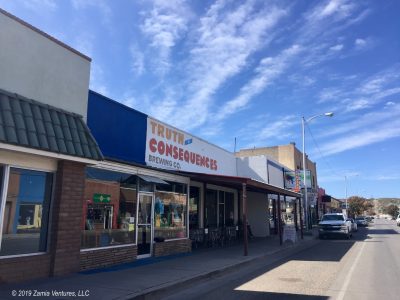 We had better luck checking out the local brewery, Truth or Consequences Brewing Co. The very large taproom reflects extreme optimism about the prospects for the business, which I suppose is nice, but like everything else in T or C it was mostly empty when we visited. I loved the great music being played (classic country, bluegrass, and singer-songwriters like John Prine) and the western decor paired with space and alien-themed artwork. And the beer wasn’t too shabby, either. Ken’s love affair with New Mexico stouts continued with the dark and rich Milky Way Stout, while I particularly enjoyed a double IPA that featured rich flavors balanced by the right amount of hoppiness. On the smooth drinking side of things, we liked the Irish Red Ale and the very light but flavorful Airstream Ultra (their version of Michelob Ultra, but with a much cooler name, obviously). One of our favorite aspects of the tasting was the clever use of old muffin tins to serve flights. We have seen so many different types of beer flight holders in our ongoing #beertourofamerica, and many are very impressive for presentation but lack functionality. Here, the battered and discolored muffin tins fit with the gritty western theme, are affordable, promote recycling, and are utterly functional. Hooray! 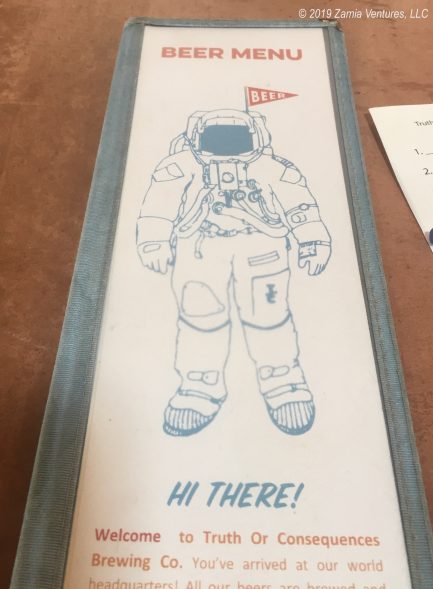 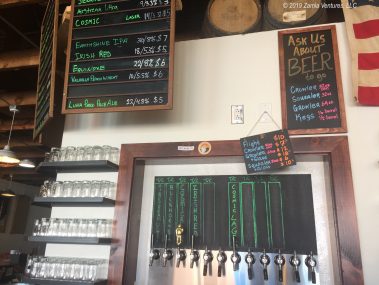 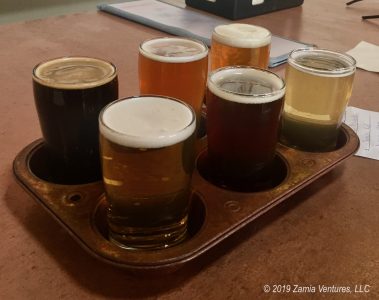 Our culinary sojourn in town also included a lunch stop at El Faro, a local restaurant that is basically a diner. In true western style, the few locals in the place stared at us with some mixture of surprise and suspicion when we entered but the staff were friendly. We wanted to try New Mexico cuisine made with local Hatch chiles — the village of Hatch is about 40 miles south of T or C — and we both ended up with the same combo platter with our choice of red or green chile. The entrees were great, but we were most impressed by the roasted pepper salsa that came with a basket of chips to start the meal. The heat was palpable, but didn’t overwhelm the flavors. Much to my delight, our bill was under $10 per entree … gotta love small towns.

Our campsite for our visit to T or C was a lakeview spot in the Lions Beach Campground at Elephant Butte Lake State Park. While the side-by-side parking spots were closer than we prefer, especially for a state park, the lake views were nice and we were just happy to enjoy sunny days in the 70s while northern New Mexico was already receiving regular dustings of snow. The park was only half full on weekdays, which made the spacing less of an issue.

To keep ourselves amused at camp, we watched and commented on our neighbors’ back-in techniques. We speculated as to why one set of neighbors chose to turn their toad into a Popemobile. We watched motorized boats and sailboats traversing the large lake. We kept our eyes peeled for the rabbits, roadrunners, and quail that regularly wandered through our campsite. The quail we could hear coming, since they make funny little noises like Minions in a constant panic. We enjoyed lovely sunrises over the lake and golden sunsets. 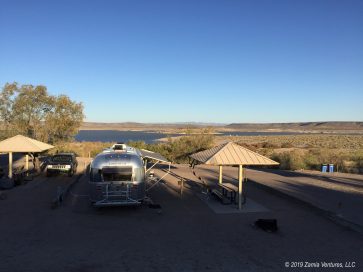 We liked our campsite better when the adjacent site was empty 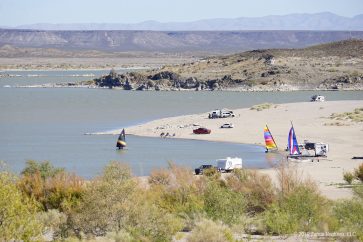 Sailboats on the lake 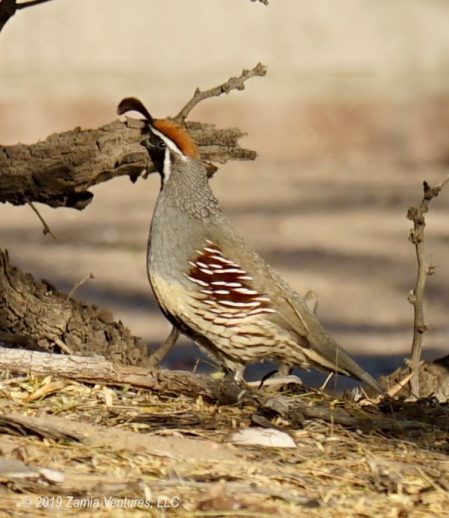 Gambel’s quail with a jaunty hat

Popemobile. Or “Pope on Board?”

We briefly checked out the main trail in the park, but getting to the trailhead was a 5-mile drive and the scenery was basically the same thing we were seeing from our campsite. Plus, the trail is apparently home to a large population of rattlesnakes, and they earned right of way on the trail.  Instead of doing a lot of hiking, we read a bunch of books and magazines. Overall, our stay was a much-needed breather from the constant grind of full-time travel. 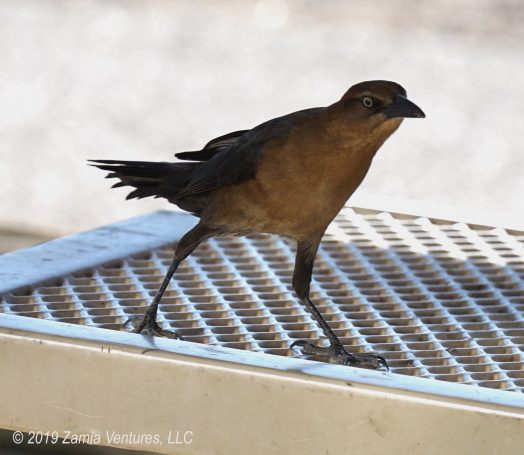 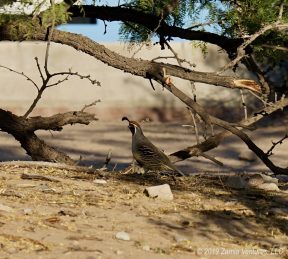 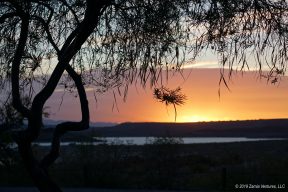 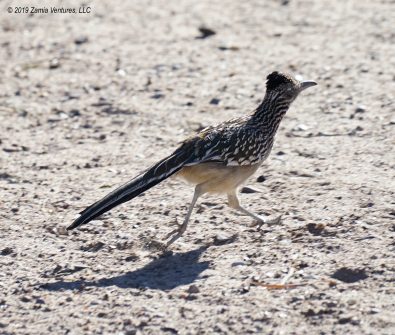 Next: we head to Alamogordo for more space-related visits, hiking, and blinding white sands.

6 thoughts on “Catching up on Life in Truth or Consequences, NM”