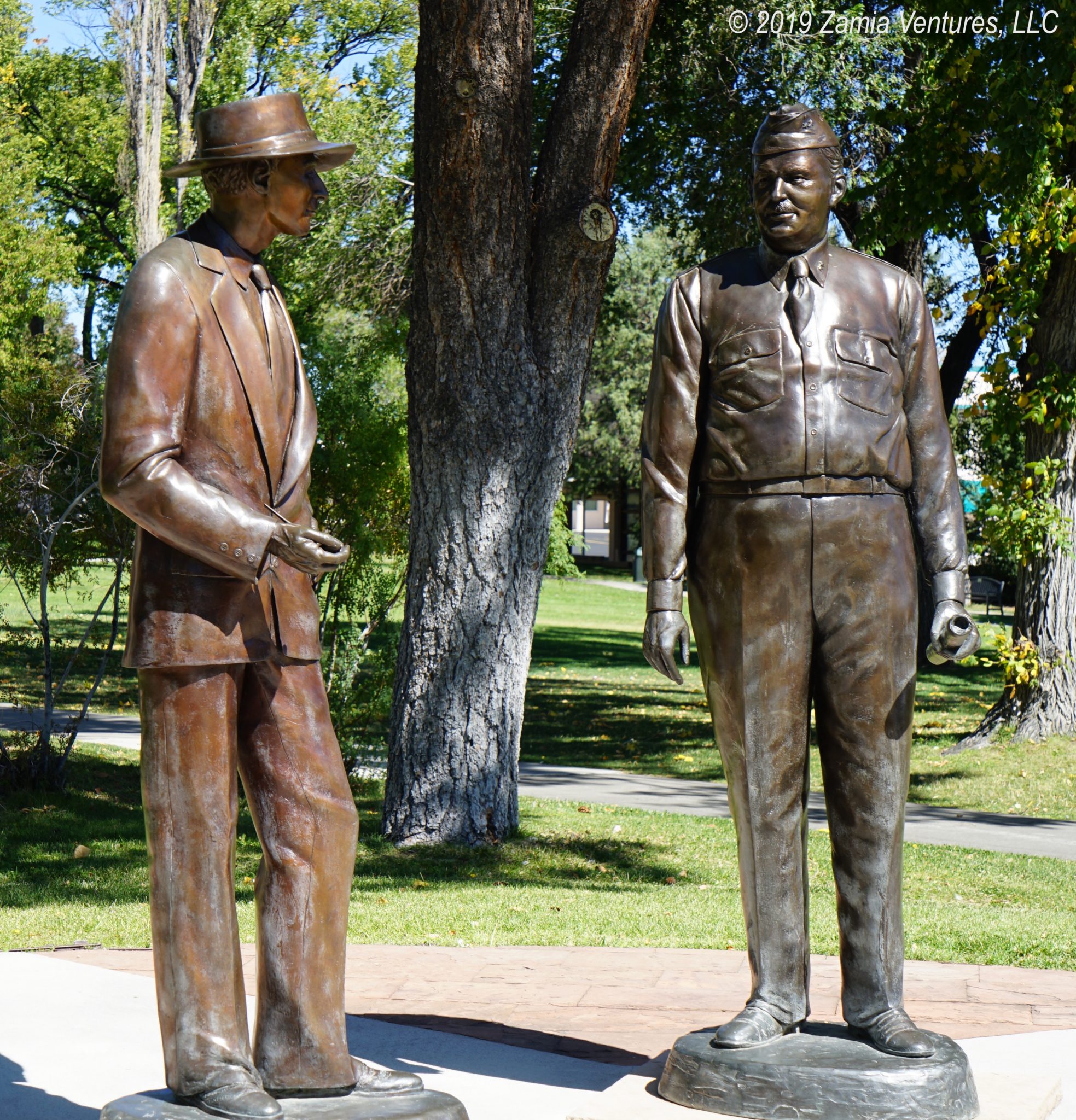 As certified science geeks, we could not visit northern New Mexico without making a stop at Los Alamos, home of the scientific laboratory component of the Manhattan Project which created the world’s first nuclear weapons. The extreme secrecy of the project’s purpose and location – personnel, supplies, and mail all arrived in Santa Fe – is the stuff of espionage thrillers, while the caliber of the scientific work taking place in this remote corner of the country was remarkable. Happily for us, Los Alamos is also adjacent to a scenic national monument with an affordable campground and abundant hiking opportunities.

Bandelier National Monument is a lightly-visited park in a fairly remote area, so we didn’t expect too much difficulty getting a site in the first-come, first-serve campground. Unfortunately a repaving project in the park was delayed beyond its original completion date, and the campground in the park was completely closed on the day we intended to arrive. We extended our stay in Santa Fe an extra day to meet the new schedule, and still stopped at Bandelier’s White Rock Visitor Center in the nearest town to check on the status of the campground when we arrived. We were disappointed to learn that the campground still was not open, despite information to the contrary on the park’s website. But we were pleased to realize that the RV parking at the visitor center included utility posts with 30-amp and 50-amp electric service, and we could stay parked at the visitor center overnight for the very reasonable rate of $20. So while we have yet to spend a night in a Walmart parking lot, we have now officially camped in a parking lot.

Because of very limited parking facilities, Bandelier is only accessible by shuttle bus from White Rock between the hours of 9 am and 3 pm during the spring, summer, and fall. Since we were parked at White Rock for the rest of the day, we took the shuttle in to the park to begin our explorations and speak with the rangers in the park about the campground schedule. We learned that the campground would be open the following day and we could arrive as early as we wished. We pulled out of White Rock around 8 am, and happily scored one of the best sites in the newly-resurfaced Juniper Family Campground. This huge pull through site was one of the few that would easily accommodate a rig of our size, and it had plenty of open sky for solar power generation. All it took to get this site for our now-shortened stay was plenty of flexibility and tenacity. 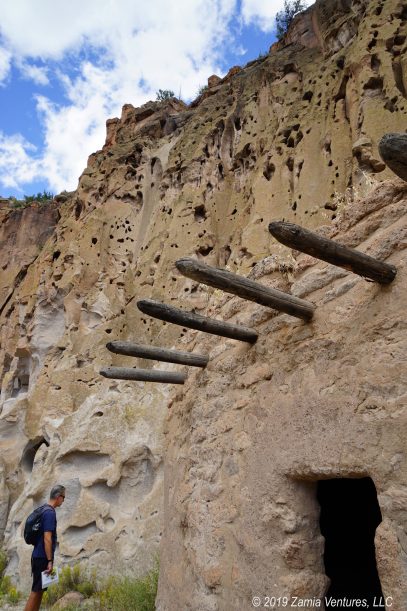 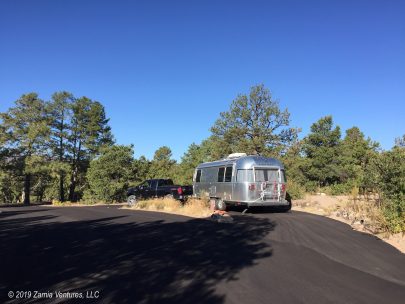 Our large campsite at Bandelier 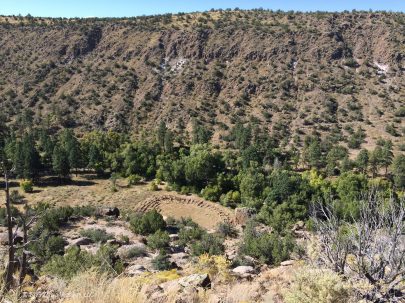 Bandelier National Monument was primarily established to preserve 3,000+ archaeological sites relating to the Ancestral Puebloans. The main canyon area was densely occupied between the mid-1200s and the mid-1500s. At its height, the community filled a huge pueblo on the floor of the canyon as well as structures built against the canyon walls called talus houses. But the park also includes 70+ miles of hiking trails along the rugged slopes of a former volcano.

We particularly enjoyed the hike on the Frey Trail from the campground on the mesa down into the main canyon, which we did several times. The views of the archaeological sites and the surrounding canyons were spectacular, and the views of the surrounding plateaus from the top of the trail gave a great sense of the ruggedness of the terrain. 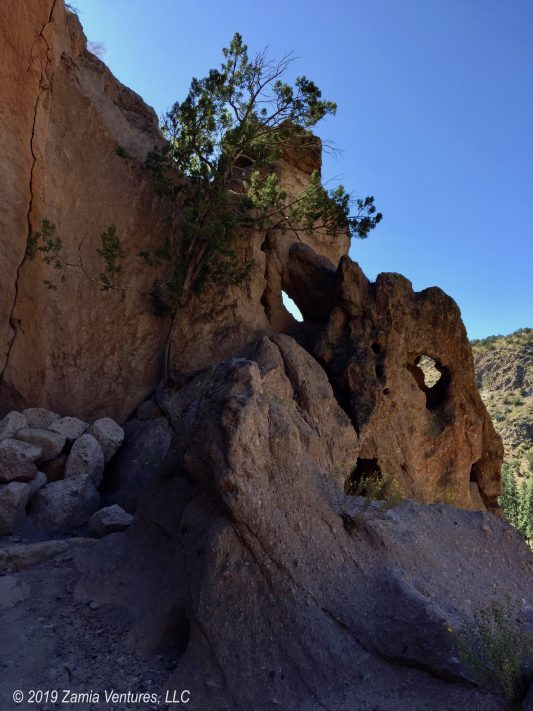 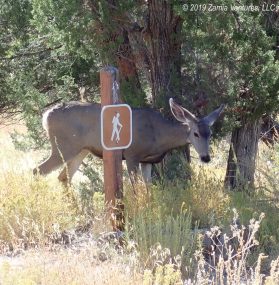 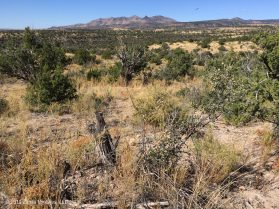 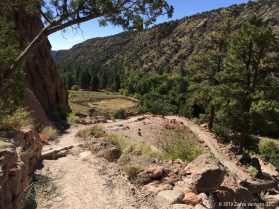 View along the Frey Trail 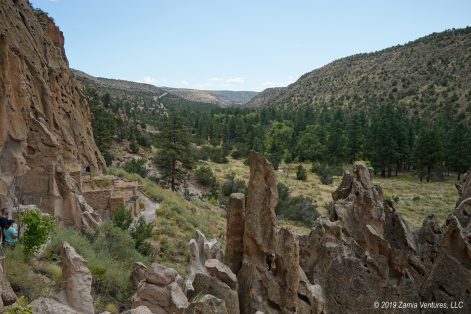 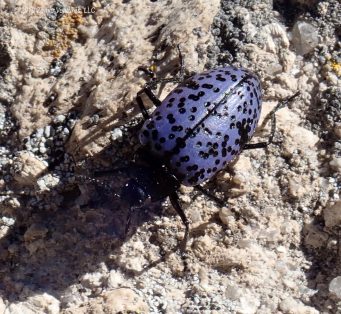 We have visited quite a few units of the National Park Service, and we always watch the introductory film. I become unreasonably excited when I recognize the voice of the narrator of the film, so when the Bandelier film began it was with great pleasure that I quickly realized Meryl Streep would be telling us all about the monument. Some of the others parks we’ve visited with memorable film narrators include Pecos (Greer Garson), Death Valley (Donald Sutherland), Channel Islands (Kevin Costner), Custer State Park (also Kevin Costner), and the Lincoln Boyhood National Monument (Leonard Nimoy).

Our time at Bandelier also coincided with the new moon. While the lights of Santa Fe and Albuquerque are too intrusive for this to be a true dark sky park, there were still plenty of stars to be appreciated overhead. 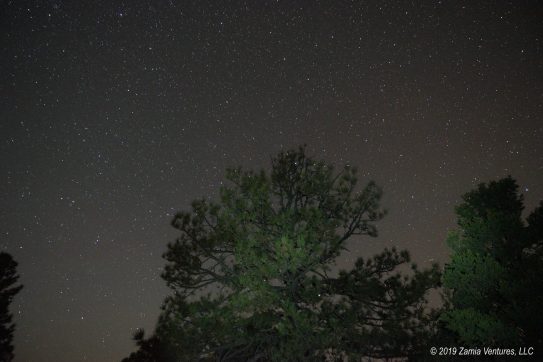 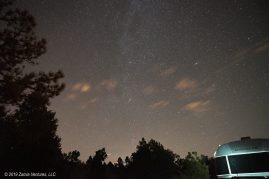 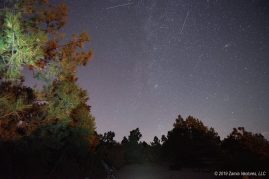 We loved our visit last year to the Oak Ridge unit of the Manhattan Project National Historic Park, at the massive secret Tennessee facility that was built to extract the fissile uranium isotope from naturally occurring uranium ore, so naturally we put Los Alamos on our “must see” list for New Mexico. Unlike the facilities at Oak Ridge and Hanford, which required quite a bit of manpower, the population at Los Alamos never exceeded 6,000 people during the Manhattan Project. But Los Alamos was home to some of the world’s most brilliant theoretical physicists, chemists, and other scientists during the critical period of 1943-1945. Because the site was hastily assembled in wartime, few of the original Manhattan Project buildings survive, but a short walking tour around the downtown area highlights the remaining buildings that were used in the war effort. 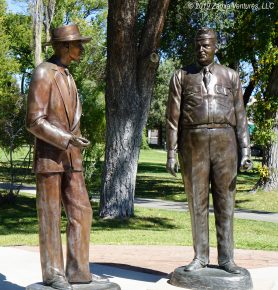 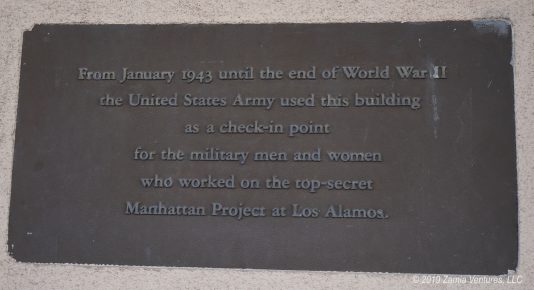 Without a doubt the star attraction in town is the Bradbury Museum of the Los Alamos National Laboratory. This marvelous free museum is just packed with information about the history and current activities of one of our most important national laboratories. The film about the Manhattan Project ably explains the technical challenges inherent in building uranium and plutonium bombs, and the creative solutions used to overcome those challenges. The museum then shows how the laboratory expanded on its expertise developed during Manhattan Project, including high speed imaging and (of course) nuclear weapons and other explosives, to continue pushing the boundaries of human knowledge. 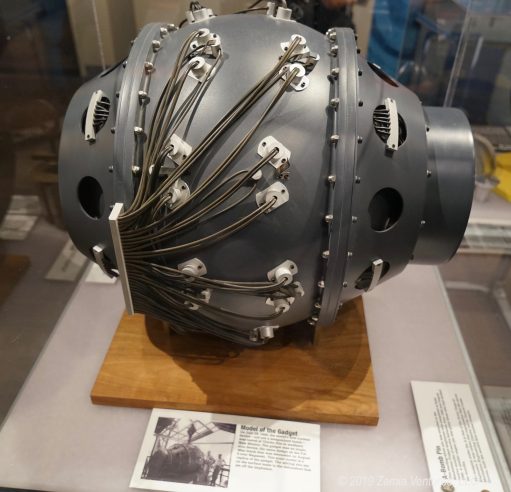 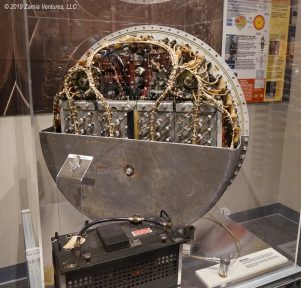 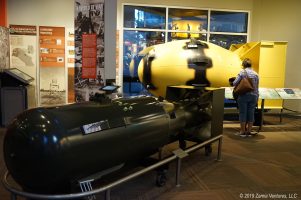 The lab’s current work includes training all IAEA inspectors who implement international nuclear treaties, constantly reviewing our nuclear stockpile to check for degradation, and performing sub-critical test detonations (i.e., not a true nuclear detonation) of our latest and greatest nuclear weapons. In a quantum leap from the primitive calculating devices used in the Manhattan Project, the lab facilities boast impressive supercomputing power which is used for complex computational problems like predicting mutations of dangerous viruses. The basic science work now being done at the lab ranges from breaking apart atoms with neutrons to running the ChemCam instrument on the Curiosity Mars Rover to developing new biofuels and nanotechnology applications. There are also plenty of truly sci-fi projects like training bees to sniff out IEDs. As a person who has subscribed to Discover magazine for decades, for me virtually every display was a brightly colored little sugar rush of cool science. 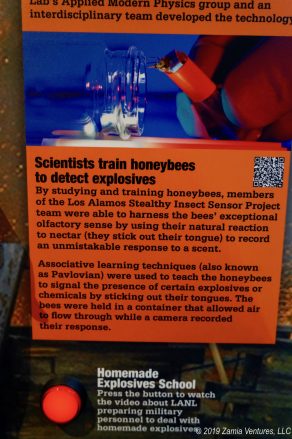 Not making this up 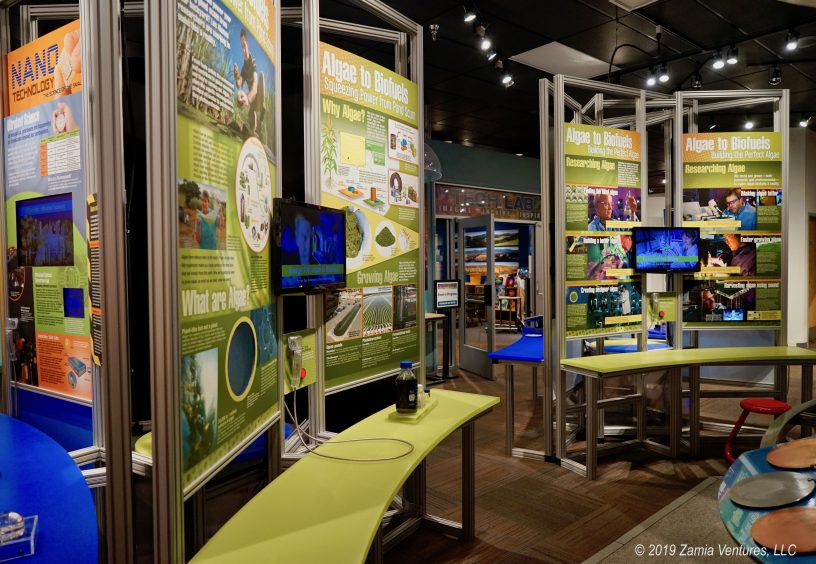 So much to learn!

The museum was also cognizant of political and social ramifications of the lab’s work, with displays touching on everything from the morality of using the atomic bombs to end WWII to health and environmental stewardship issues relating to nuclear waste. I was amused to see several quotes from Secretary of Energy Rick Perry fawning over the fine work of the lab, considering that he ran for president in part on a platform calling for the entire Department of Energy (which operates our national labs and maintains our nuclear arsenal) to be dismantled. I do enjoy it when museum curators display a little snark in their work.

Next up: a quick stop at Kasha-Katuwe Tent Rocks for some interesting geology and hiking before we make our way down to Albuquerque for Balloon Fiesta.