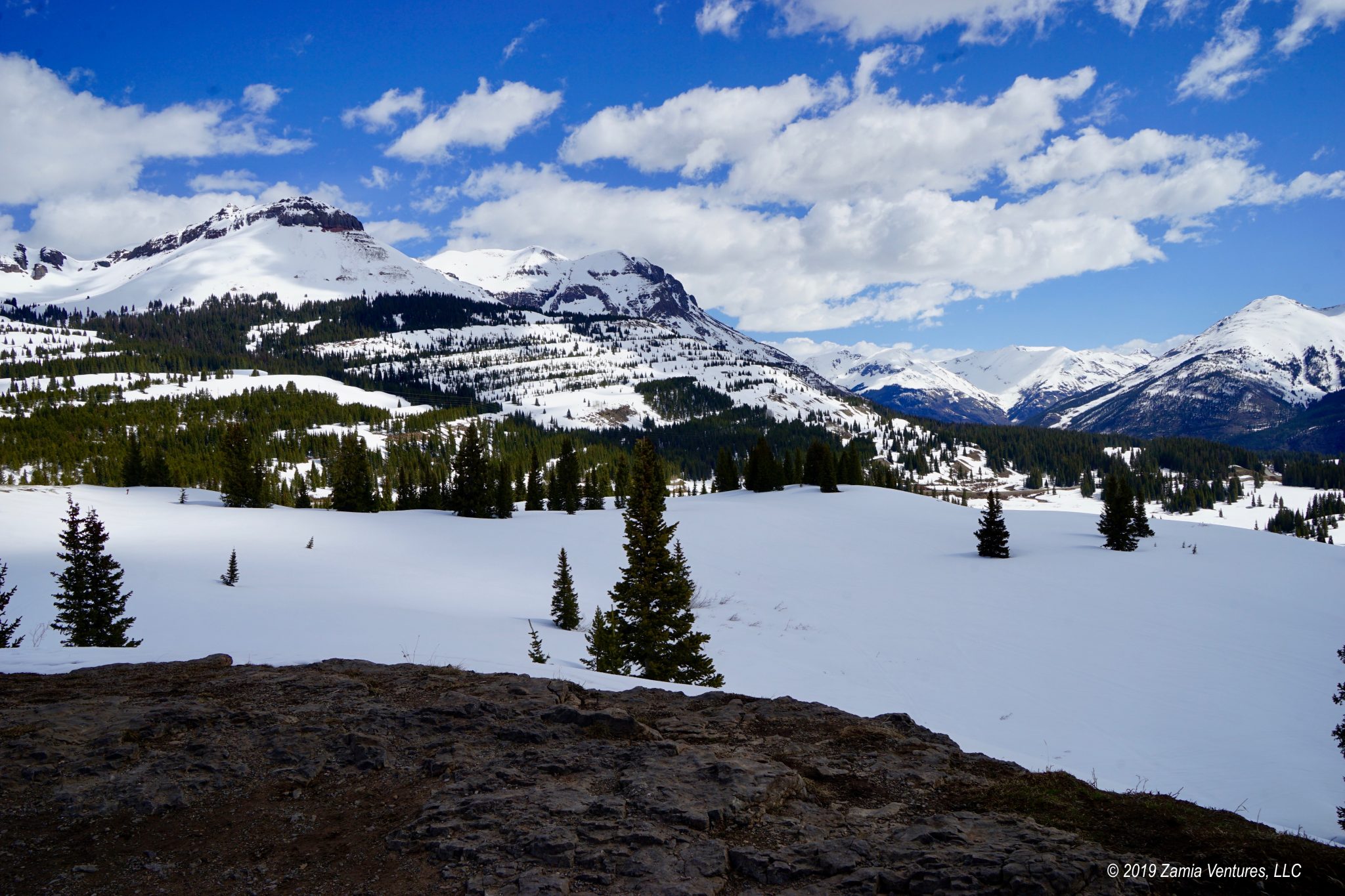 After struggling for most of the month of May with medical challenges and unseasonably bad weather, the theme of this week was getting back to normal. We camped in a place that is more typical for us, and we got back to doing our typical activities. The grill even came out of storage, and Ken proved his grilling skills are undiminished by handling the main cooking for many meals, including a nice birthday dinner for moi.

After three straight weeks in private RV parks — which were convenient but not exactly overwhelming in terms of natural beauty — we were pretty thrilled to pull into Junction Creek Campground in the San Juan National Forest. Unlike typical national forest campgrounds, this campground has a loop with electricity, and knowing that we would encounter a dense tree canopy here we made sure to reserve a spot in the electric loop so solar power generation would not be an issue. It’s a good thing we did, since the campground is indeed very shady, and because it snowed yet again during our stay. Mother Nature obviously doesn’t read a calendar very well, because we all know that snow after Memorial Day is a no-no. Fortunately it was one brief dusting that melted by mid-morning. 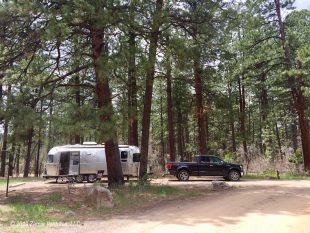 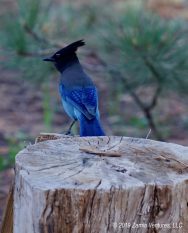 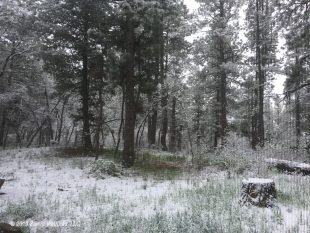 As I look out the back window and weep…. 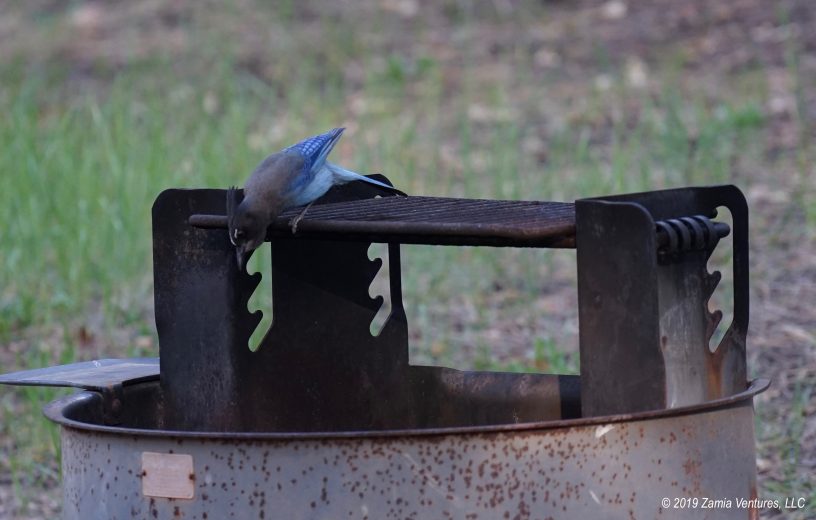 Hey! Anything good in there?

Despite some iffy weather, we loved the peace and quiet of the campground and being surrounded by nature. Having robins, Steller’s jays, Abert’s squirrels, and deer pay regular visits to our campsite was a highlight, but we were so forest-starved that just the sound of the wind in the trees made us pretty happy.

One great feature of the campground is that it is adjacent to a section of the Colorado Trail, a 500-mile trail that stretches from Denver to Durango through some of Colorado’s best scenery. We were happy to do multiple out-and-back hikes on the portion of the trail closest to our campground, covering the initial section to Gudy’s lookout. The initial 1.5 miles is an easy climb alongside a rushing crystal clear creek, followed by switchbacks up a mountain to the lookout point. During our visit, the trail-side shrubs were full of white blossoms, which were a combination of fendlerbush, mountain mahogany, and saskatoons. I had fun examining the flowers (do they have 4 petals or five?) and shapes of the leaves to distinguish them, much to Ken’s dismay. He had a point: they were all pretty nice, regardless of species. 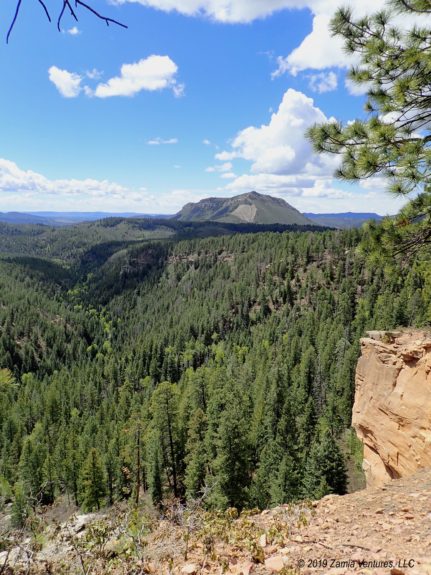 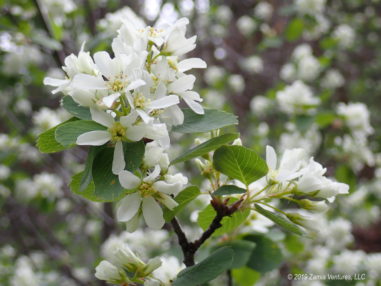 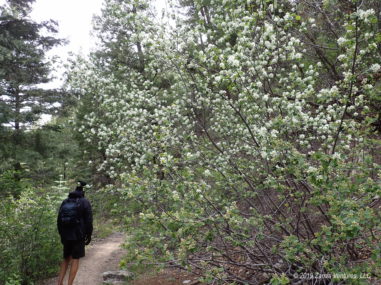 Ken on the trail with blooming Saskatoons

Another hike we enjoyed in the area was the Animas Mountain Trail, which starts at the base of a mountain right next to a residential Durango neighborhood, and gains quite a bit of elevation to reveal excellent views over Durango, the Animas River Valley, and the surrounding mountain ranges, before looping back to the trailhead. Even though the trail has a fair amount of traffic noise from being so close to town, the wildflowers were popping and we were glad to challenge ourselves with the 1,500 feet of elevation gain in our efforts to get back in shape after a long layoff. 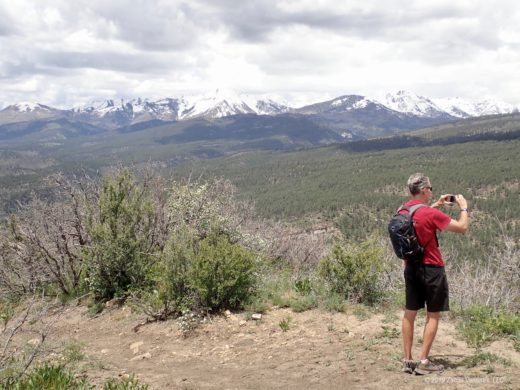 Ken working on the perfect shot 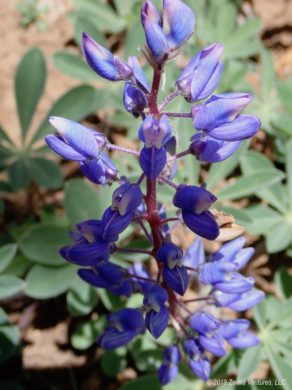 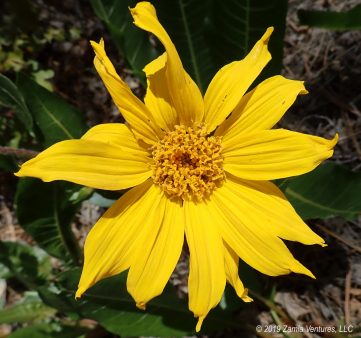 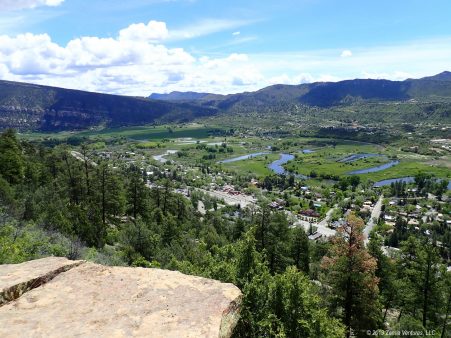 View of the Animas River Valley north of Durango

The town of Durango is a charming place that really embraces its 19th century roots, with beautifully maintained Victorian buildings and a consistent western feel. The Animas River runs through town like a backbone, and the town has smartly created an 11-mile multi-use walk/rollerblade/bike Animas River Trail along the river. A small but interesting destination located adjacent to the river and the trail is the Wildlife Museum and Fish Hatchery. The two-room (free) wildlife museum basically has mounted specimens of dozens of birds and mammals found in the Durango area and in higher elevations to the north. While I am not usually a fan of stuffed animals, we found it to be a good place to reacquaint ourselves with the mountain creatures we encountered last summer. Having all the animals sitting still also helped us examine things like the shocking difference in size between eagles (bald and golden) and other raptors like peregrine falcons and Coopers hawks. 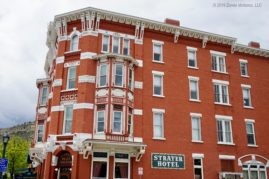 Animas River with walkway across

The most interesting part of the fish hatchery was the video, shown in the wildlife museum, explaining the history and current work of the hatchery. I was surprised to learn that the hatchery started in the 19th century as a private enterprise engaged in aquaculture to provide fish protein to early settlers of the area, and only later became a state-run operation. The hatchery raises multiple species of fish to fingerling size (including the new-to-me freshwater Kokanee salmon), but the main inhabitants of the hatchery are rainbow trout, which are raised to catchable length of 10 inches before release. Unfortunately, there was no real discussion of the ecological effect of releasing millions of non-native fish into the waterways of Colorado, which seemed like a glaring oversight. I guess I shouldn’t have super high expectations for a place that (a) was free and (b) bore a striking resemblance to a taxidermy shop. 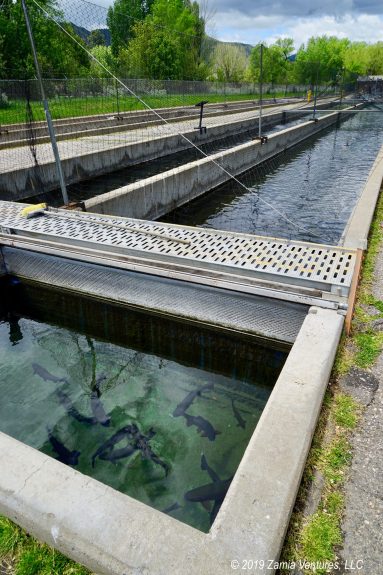 Raceway at the fish hatchery 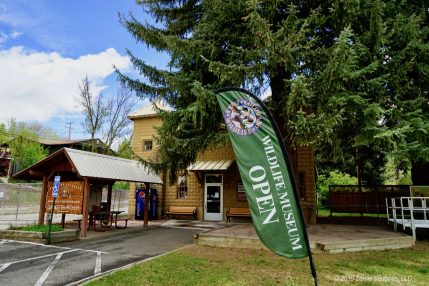 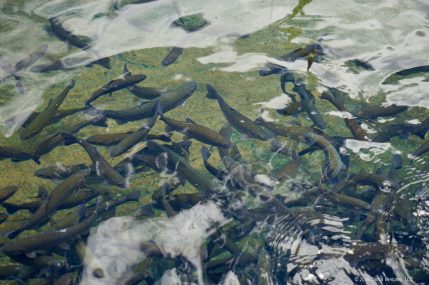 Some of the millions of trout

Another benefit of being in the relatively large town of Durango (pop. 18,000 or so) was having a large selection of stores (Home Depot, how we have missed you), grocery stores, and breweries to visit. One day we checked out Steamworks Brewing Company, which was conveniently located in the historic downtown area and offered an interesting range of options from very light kolsch style beer to midnight-dark stouts. Steamworks was nice, but we were glad we later made the effort to stop at Ska Brewing, which is in a new building in a nondescript industrial park. The brainchild of several skater dudes, this brewery has a very distinctive vibe. I loved the creativity of everything from the pop art decorating the walls to the bar/tables and taps made from recycled bowling alley materials to the unusual beer options, and it has been successful for 20 years so obviously other people agree. Plus, the brewery roof features the largest solar array I’ve ever seen on a single commercial building.

Part of the Steamworks beer menu 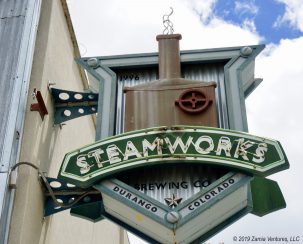 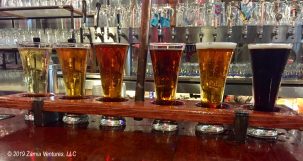 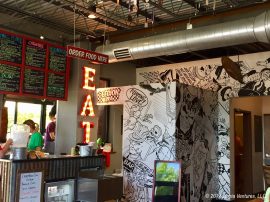 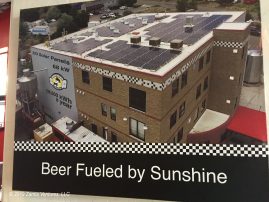 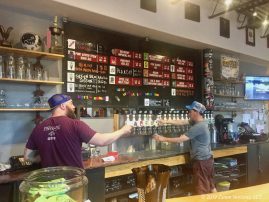 The impressive San Juan Mountains make a formidable barrier to travel, but roads have been snaked through the mountains to create one of the more interesting travel routes in the US, the San Juan Skyway. This 230-mile loop passes through the lower-elevation towns of Durango and Cortez but also makes a circuit through much of the high country of the San Juans, passing through Silverton and Ouray and near Telluride, among other places. The section from Durango to Ouray is called the Million Dollar Highway — maybe because it cost a million dollars to build, or possibly because there’s a million dollars worth of gold ore in the fill dirt — but it certainly delivers million dollar views. We took a drive from Durango to Silverton, and were wowed by the dramatic scenery at every turn. Coming over high mountain passes at elevations over 10,000 feet gave unparalleled views across deep valleys to countless distant peaks. An information sign at one of the lookouts said that this area (the Weminuche Wilderness) has some of the cleanest air in the US and I believe it — the views just went on for miles on the clear, sunny day that we visited. 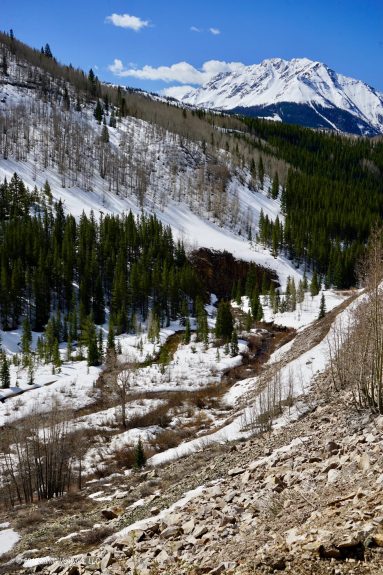 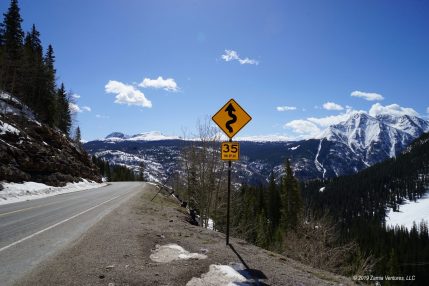 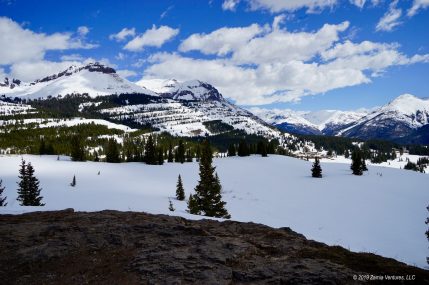 The town of Silverton originated as the commercial center for mining operations located all along the Animas River in the high San Juan Mountains. By 1883 the town had 2,000 residents along with two banks, five laundries, 29 saloons, and a notable red light district, making it the perfect destination for miners. The wealthier visitors had the option to stay at the classy Grand Imperial Hotel right on the main street of town. The town eventually boasted rail service on three different lines, including one from Durango that now operates as the tourist-oriented Durango & Silverton Narrow Gauge Railroad. 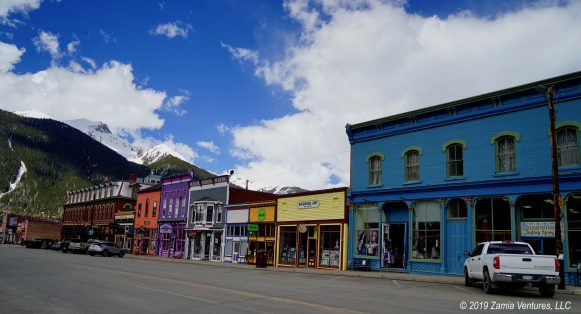 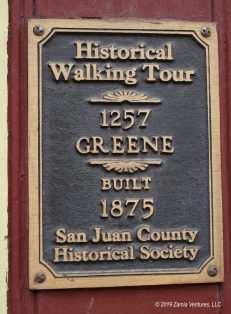 Lots of historic buildings throughout town 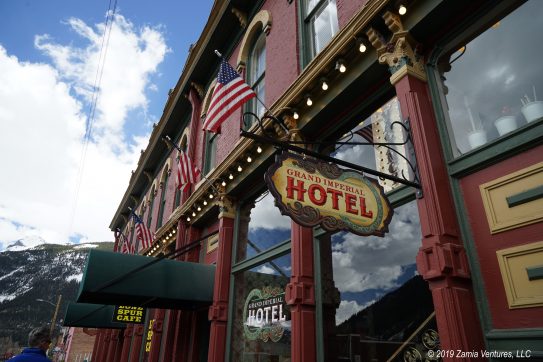 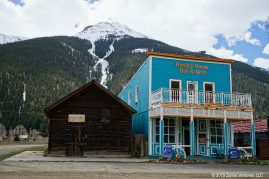 Town is surrounded by dramatic mountains 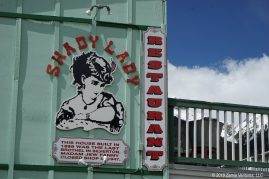 Virtually the entire town is part of the federally-designated Silverton Historic District, with dozens of 19th century and early 20th century commercial buildings lining the main streets and stately Victorian homes sprinkled along the outlying streets. The small town is surrounded on all sides by high mountain peaks which are visible from all angles in town. In a weirdly authentic element, many of the town’s streets are unpaved and instead are just packed dirt. Other than the modern paint schemes and all the cars on the roads, the town is a surprisingly well-preserved version of its original self. While it has certain elements of a tourist trap — it’s obvious that the only viable commercial enterprises in town are those catering to tourists — I was mostly happy that this town was able to pivot away from natural resource extraction and become a different type of destination. Most of the other mining towns in the mountains are just ghost towns, so Silverton’s resilience is impressive. While shopping for T-shirts, trinkets, and fudge isn’t really our thing, I enjoyed our stop in Silverton on the drive through the majestic San Juans.

Next: a week of fun in the sun in northern New Mexico before we show up for a 2-week commitment of work (*shudder*).

Wowed by Wildflowers in Crested Butte

10 thoughts on “Returning to Normal in Durango, CO”