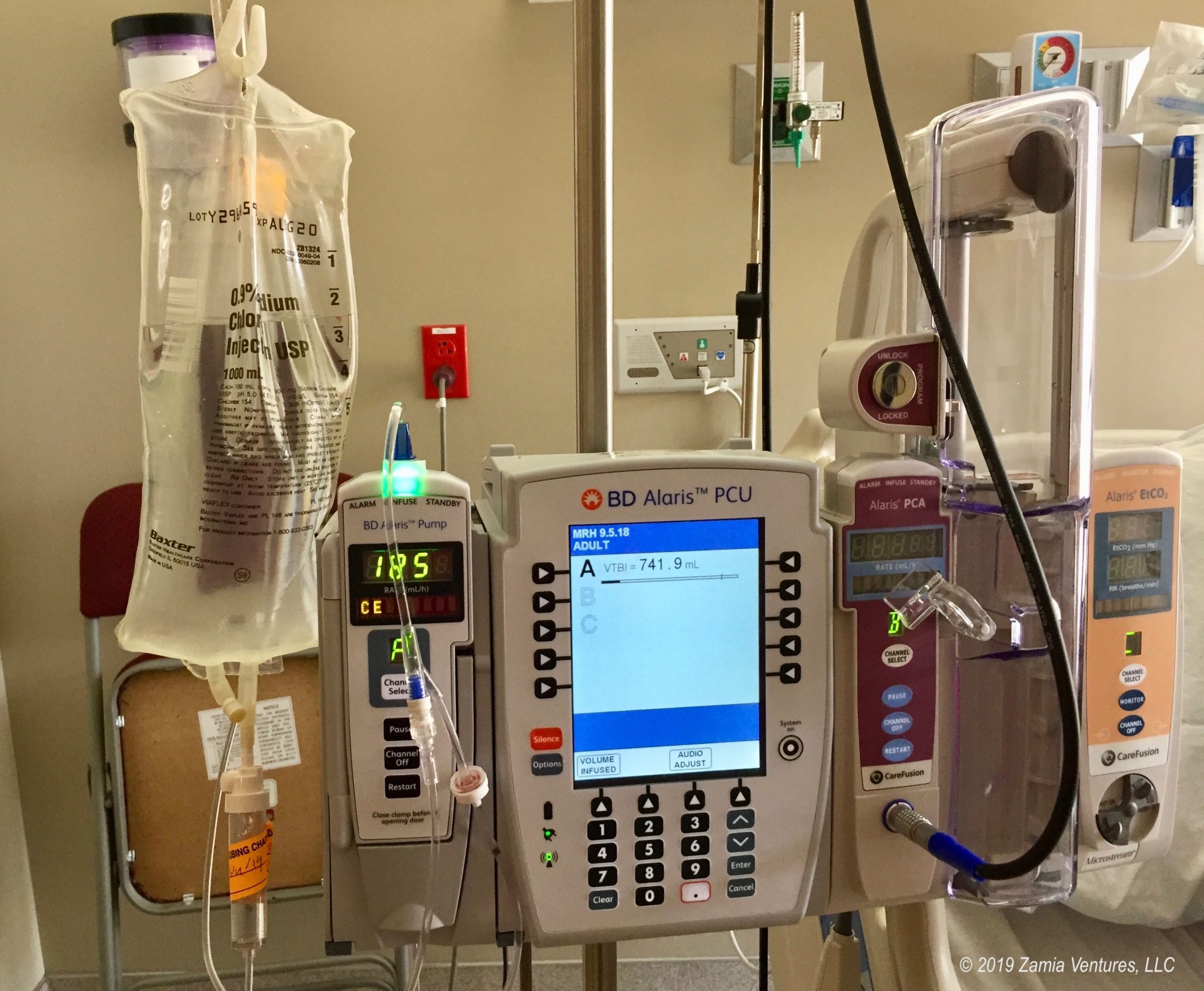 Remember at the end of my last post how I joked about public health authorities quarantining us? Well, that actually happened. Sort of.

Unfortunately Ken’s flu-like symptoms persisted and his condition continued to deteriorate, so on our last scheduled day in Moab we visited the walk-in clinic at the hospital in hopes they could offer him some relief. This turned into visiting the ER followed by a diagnosis of a significant and systemic streptococcus infection, which led to Ken being admitted to the hospital, which ended up being a 6-day inpatient stay for an intensive antibiotic course followed by daily outpatient visits for a yet-to-be-determined period of time.

The best and most important thing is that Ken is going to be fine, thanks to the wonders of modern medicine. Let’s decompress from that scare with some nice flower pictures, shall we? 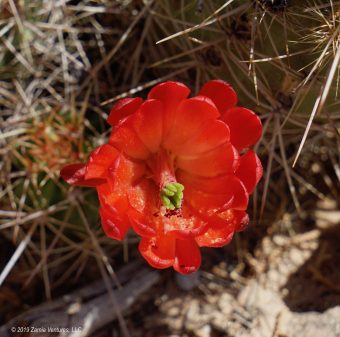 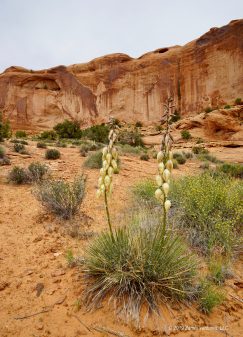 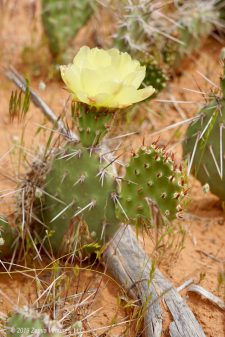 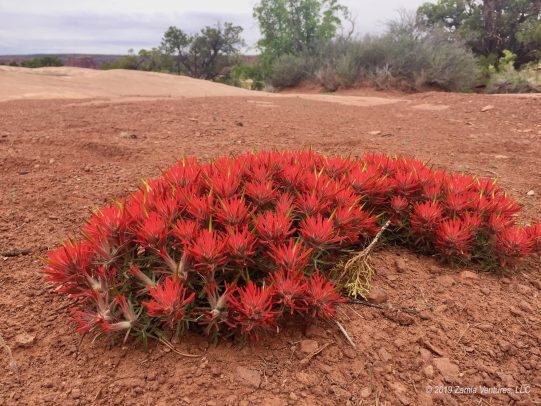 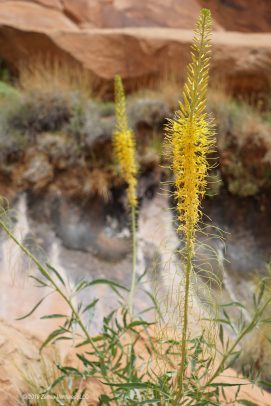 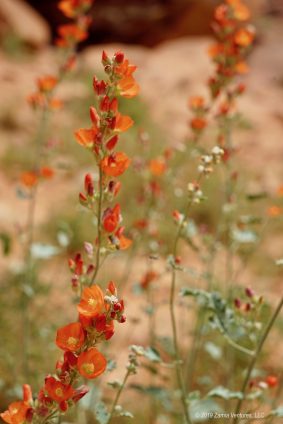 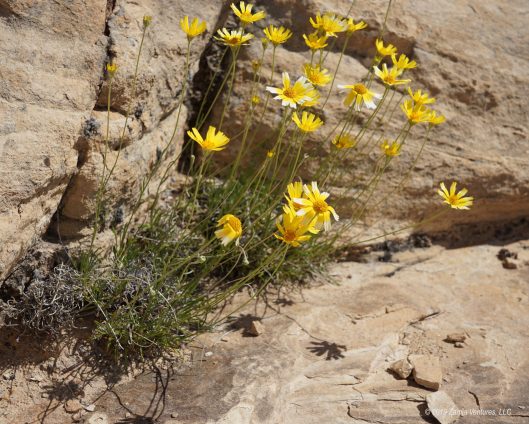 Of course, this is not how we were planning to spend the weeks following our visit to Moab. Since Ken was admitted the day before we were scheduled to leave Moab, this also meant that I was solely responsible for hitching up the rig to pull out of Dead Horse Point State Park and finding a new place to stay in the area. Let me tell you, getting same-day reservations in Moab in the busiest month of the year (May) is no simple task. But the camping gods were smiling on us, because I pulled into an RV park expecting to stay in their no hookup overflow area only to learn that there had been a cancellation on a full hook up site just minutes before my arrival. That gave us a few days to regroup, and then we decided that I would relocate the rig to Monticello, about an hour south of Moab. In this small town I could secure a full hookup reservation for 10 days (through the end of Ken’s original expected hospital stay) in an easy-to-access pull through site. Of course, this meant that I was on my own to relocate the rig twice.We regularly alternate driving, and I was only traveling short distances, so I wasn’t concerned about driving our rig. Instead, the challenges were all in the hitching and unhitching phases. 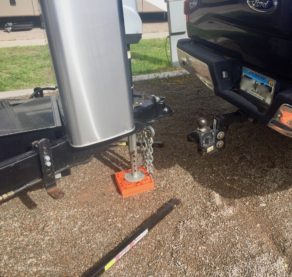 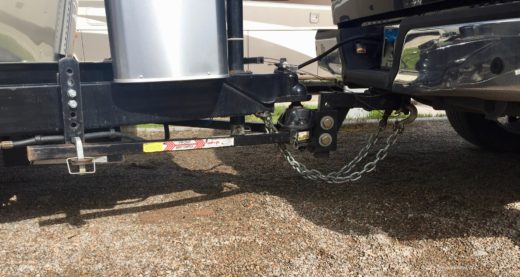 Every RV setup is different, but in our case the hardest part about hitching is backing up the truck so that the ball is directly underneath the hitch on the Airstream. It can’t be too far to either side, and it also can’t be too far forward or back. We’ve had plenty of situations in which, because of slopes or weird angles or blocking trees in the campsite, it’s been extremely difficult to get properly aligned to engage the hitch. I was lucky that in both cases I was working with level sites without any challenging features. While this process was made easier by having a good backup camera on the truck, it was still a pain with lots of trial and error. Attaching and removing our sway-control bars also requires a certain amount of physical force since they carry part of the weight of the trailer.  All went well with those until I arrived in Monticello and simply could not get one of the sway bars to release. Luckily we carry a crow bar with us, because it was exactly the right tool to pry off the sway bar.

Once we figured out where the house (and I) would be parked, it was just a matter of waiting for magical antibiotics to do their work. Thanks to his generally good health, Ken responded well to the antibiotics and after several days was climbing the walls to leave the hospital. We’re still waiting for the doctors to give Ken a clean bill of health during our daily hospital visits for antibiotic injections and blood tests, and we’re hopeful that will happen soon.

How about a few more flower photos to help us keep calm: 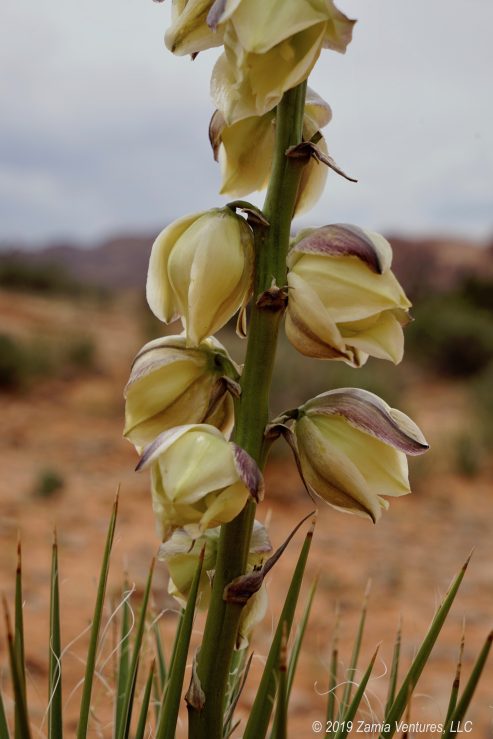 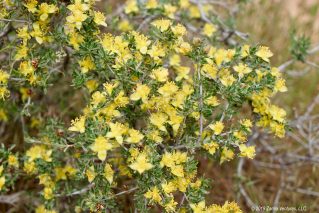 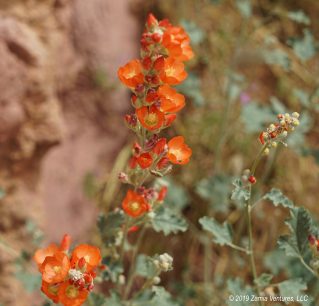 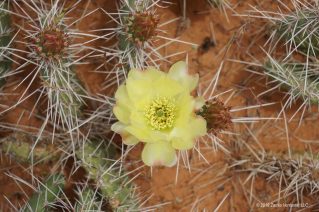 Since apparently part of our function in life is to serve as a cautionary tale to others, here are several observations from our experience.

1. For people on the road, it is critical that all the adults be fully capable of operating every aspect of the rig. While having your partner hospitalized for a week is probably unlikely, at some point he or she probably will be sick or injured or called out of town for a family emergency. When I had a bad cold several weeks ago, between my coughing and sneezing and all the Nyquil I was taking it would not have been at all safe for me to drive the rig, so it was up to Ken to get us relocated (even though I could help a bit with hitching up). Normal life events like illness will certainly strike people on the road and RVers need to be self-sufficient enough to weather them.

2. Always be sure the budget includes plenty of emergency funds for vehicle repairs, health insurance deductibles, and the like. This money will be spent on some unexpected thing or another, as we can attest from 1.25 years on the road.

3. Accept the fact that plans will change, and be willing to go along with that. We spent much longer than expected in the Moab area, and ended up skipping a few places we intended to see. We worked hard to view it as an opportunity (“Hey, we can get to know this area even better!”) and not a disappointment. And since we normally travel slowly, with a few adjustments we were able to get back on our intended travel schedule. Also, be sure that cancellation fees are part of the budget, because cancellations will happen.

4. Pre-Medicare RVers really need to have health insurance with a nationwide network of providers. Even for people who plan to return to their home base every year for things like annual checkups, it is important to have access to in-network health care on the road. Our plan is with Blue Cross/Blue Shield, purchased on the ACA exchange in Florida, and because the Moab Regional Hospital was in-network our cost was limited to our per-person out-of-pocket maximum of $7,900. For out-of-network services that cap rises to a punishing $15,800 per person. People without insurance would be faced with a truly staggering bill for something that was eminently treatable (thanks to modern antibiotics) but required a hospital admission.

5. Small town hospitals can offer great service. In our experience, the staff in Moab was uniformly kind, friendly, and dedicated to patient service. Understanding the limitations of their small size, they went to all sorts of lengths to provide the best possible care, including bringing in an infectious disease specialist to consult remotely.

6. Don’t be afraid to rely on the kindness of strangers. When I was struggling with our hitch I had offers of help from RV park neighbors which I didn’t ultimately need, but which were clearly genuine. There’s nothing wrong with accepting help from strangers — we’ve all been in tough situations at some point and most people are happy to lend a helping hand to pay it forward.

I spent the first three days of Ken’s hospital stay hanging around Moab, doing errands between hospital visits. I did make time for one short hike, the hike out to Corona Arch on the BLM property across the highway from Arches National Park. The drive out to the trailhead was a scenic one, hugging the north bank of the Colorado River as it winds through some fairly deep canyons. Because this is Moab, the vertical canyon walls were just covered with people engaged in climbing, rappelling, and other sports involving vertical rock faces. A railroad spur line along the river added a sense of order and human touch to an otherwise wild landscape.

This trail itself is comparable to the Delicate Arch trail we visited last week in Arches because it’s about the same length (3 miles round trip) and features a comparable amount of elevation gain (close to 500 feet), and involves plenty of hiking on slickrock. But this trail was superior in several respects. One is that the crowd level was reasonable  — I saw around 30 people over the course of a few hours — and much less like a parade. Also, the trail has some fun little obstacles like short sections with steel cables and a small ladder. The arch itself is larger, and situated majestically at the head of an impressive canyon. This hike was a perfect antidote to the craziness of Arches National Park and a nice break from the stress of hospital visits. 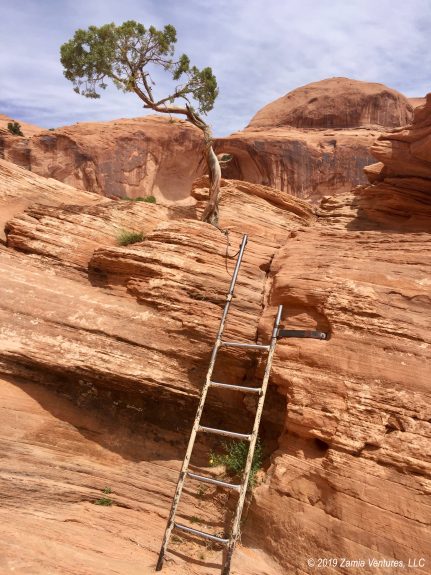 One of the obstacles on the Corona Arch trail 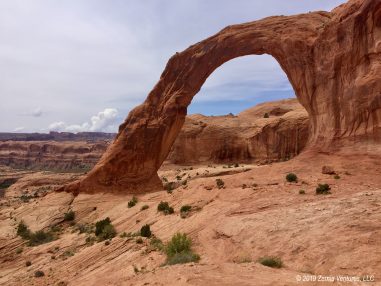 Looking back on the Corona Arch 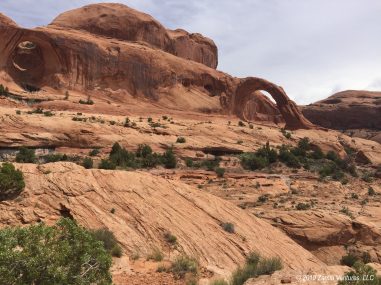 Next up: we continue to hang around the Moab area for medical treatments.

17 thoughts on “Well That Sucks: Serious Illness on the Road”