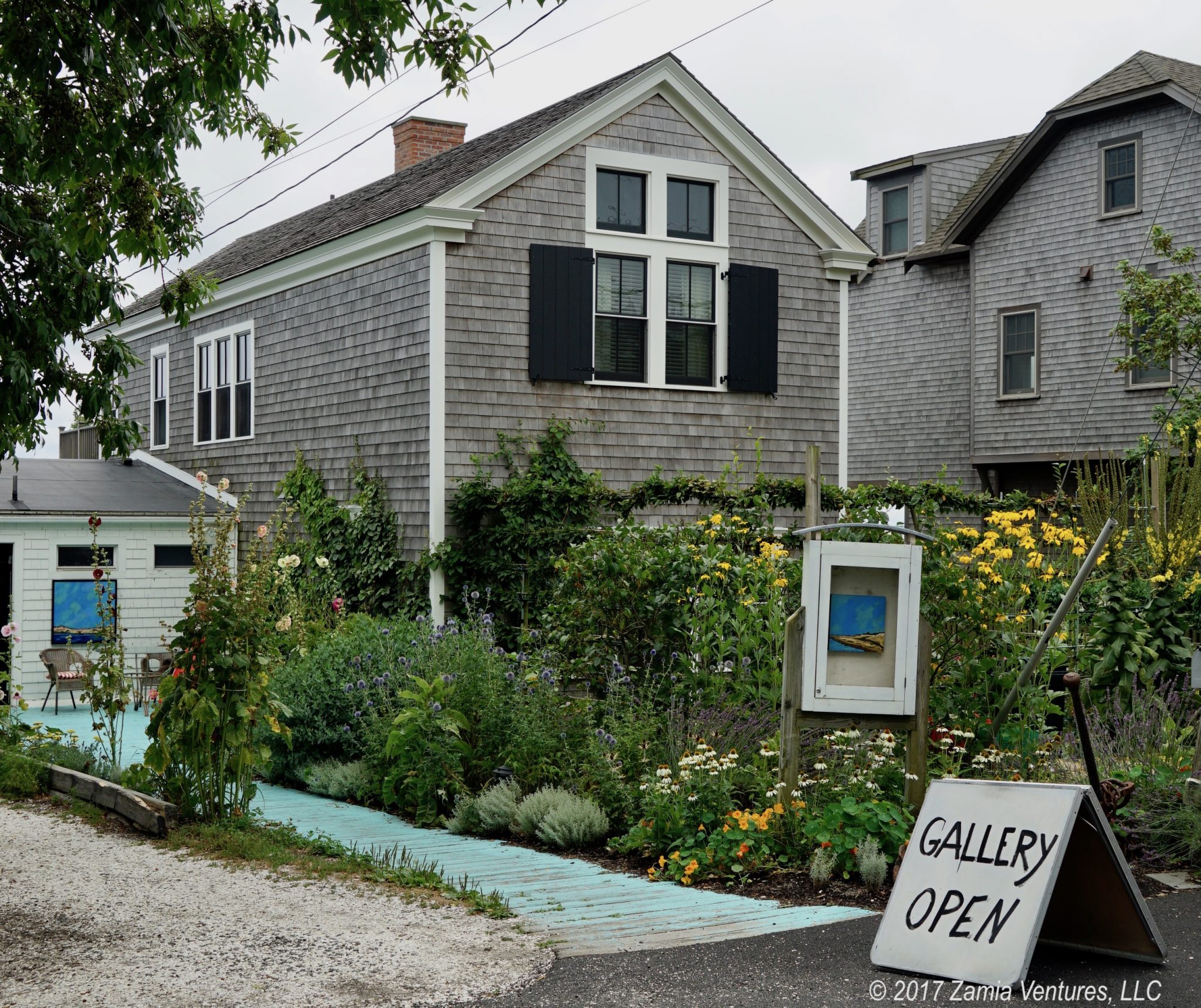 A family reunion has brought us to Cape Cod for a week long stay in Wellfleet (map), which is one of many historic settlements on this maritime peninsula. Wellfleet is at the point where the elfin-shoe of the Cape begins curving back from the Atlantic toward the Massachusetts mainland, and is considered part of the Outer Cape.

At the very tip of Cape Cod — the extreme end of the Outer Cape — is the community of Provincetown (map), whose roots go back to the Pilgrim settlers of Massachusetts. It’s considered a very distant part of the Cape, but since our vacation spot is approximately 99.99% of the way from Miami to Provincetown (or “P-town” to those in the know) we knew that at least one vacation day would be devoted to a trip to this well-known summer vacation destination. When we had a weather forecast calling for overnight rain and an overcast day, making for an unappealing beach day, our timing was set and plans were made.

P-town is notable in Massachusetts history as the first place the Pilgrims landed in November 1620, after finalizing and executing the Mayflower Compact while anchored in the protective natural harbor of Provincetown. So much for the myth about Plymouth Rock being the first landing place! 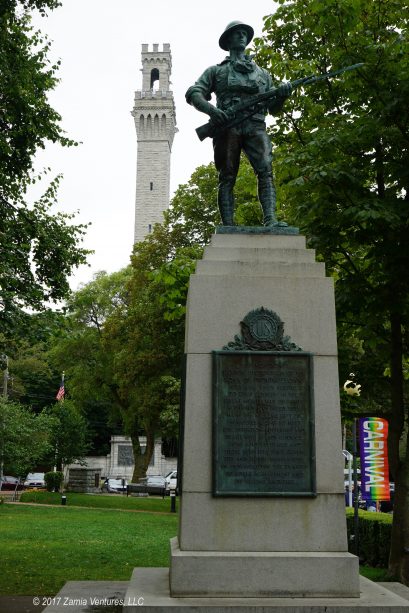 P-town’s WWI monument in front of city hall, with the distinctive Pilgrim Monument in the background. 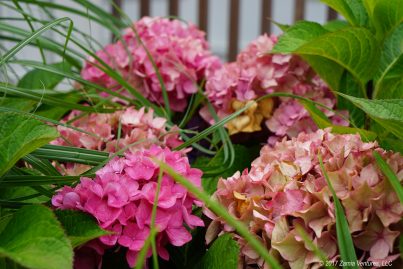 To commemorate the Pilgrims’ landing, a civic association decided to erect a tower on the highest point in P-town. Construction on the Pilgrim Monument began in 1907 and the tower was dedicated in 1910 by President William Howard Taft. Today the distinctive edifice — modeled on a 14th century tower located in Sienna, Italy — serves as a handy navigation guide for everyone in the P-town area.

P-town has come quite a long way in 400 years. It has a history of success in various maritime industries including fishing, whaling and salt-making, and beginning in the early 20th century it became a popular vacation and residential destination for artists. The bohemian scene also eventually attracted a diverse community that embraced everyone from hippies to LGBTQ people. P-town has been renowned for several decades as the most popular gay summer resort in New England, while being home to a wide variety of fine art galleries. It’s certainly an interesting evolution from Puritan roots.

Our day in P-town gave us a chance to interact with both the history of the area and its present role as a popular tourist destination. 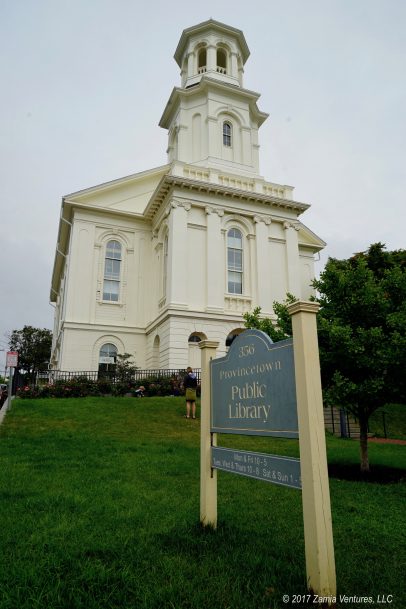 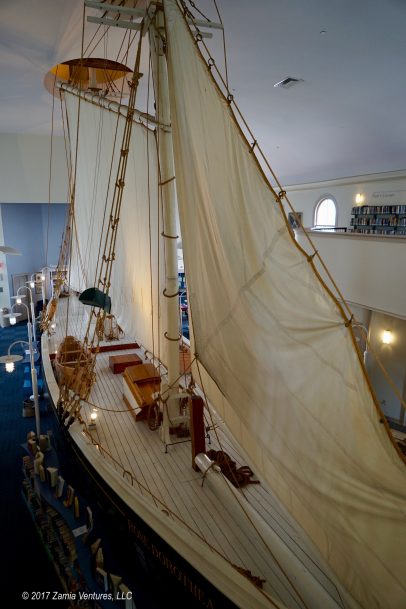 The best thing we visited was also the easiest. A free visit to the local public library, set right in the heart of downtown, gave us a chance to see an interesting 1/2 scale model schooner installed in the second and third floors of a former church building. In 1907 — a busy time for P-town, since it also marked the commencement of the Pilgrim Monument — a P-town-based schooner named the Rose Dorothea won the Lipton Cup, a 42-mile yachting race from P-town to Boston to Gloucester. The victorious local heroes brought home a generous $650 purse, a large and intricate silver trophy that is displayed on the first floor of the library, and apparently endless bragging rights, since this particular boat race remains a significant subject of celebration in P-town.

The scale model of the boat stretches an impressive 66.6 feet and totally dwarfs the surrounding library stacks and computer stations. Yet somehow it works as an installation on the floor that houses the books for children and young adults. We enjoyed the displays describing the history of the original boat and the race as well as photos from the construction of the replica in the 1970s.

The rest of the day was spent fighting the crowds on Commercial Street, the main drag of P-town which runs along the waterfront. The core of the downtown is filled with charming homes in the classic Cape Cod style (of course) which have been converted to all manner of retail establishments. There are high end fine art galleries, expensive clothing boutiques, and jewelry stores, along with more lowbrow places selling cheesy T shirts and souvenir shot glasses. From the lines, fudge and saltwater taffy appear to be extremely popular, though Ken assures me there is no good reason at all to stand in line for salt water taffy. He reports that the main impression of this regional delicacy is “waxy” — not exactly the quality I am looking for in a candy experience.

There are also restaurants running the gamut from casual places selling fish tacos to much fancier gourmet places. We wandered the downtown area for several hours, grabbed a sandwich from an inviting deli, and enjoyed all the colorful flowers which cheered up the scene on an overcast day. I am very glad we spent the time to experience this unique Cape Cod destination, and also glad that we probably will never visit again. I like the weird and very inclusive vibe, but coming from Florida we have a pretty low tolerance for tourist traps … and one day in P-town was enough for us. Click through the gallery below for more pictures of this visually interesting place. 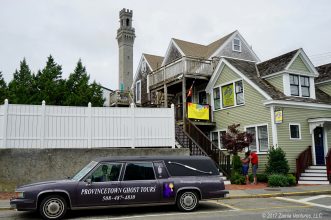 This is weird P-town — a hearse advertising ghost tours, an art studio, and the Pilgrim Monument.

Flowers in all the front yards 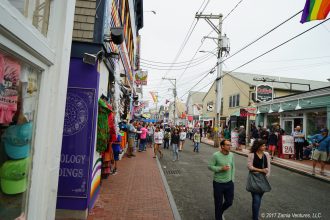 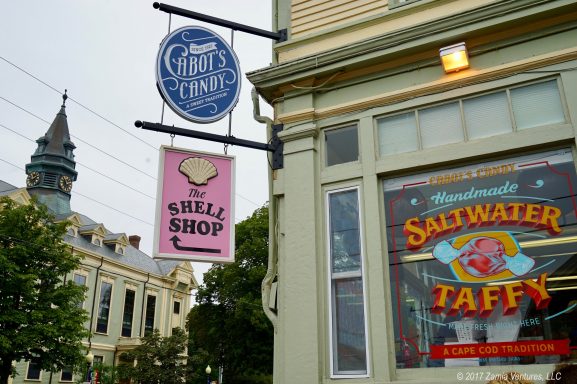 Things that one sees in most seaside tourist towns 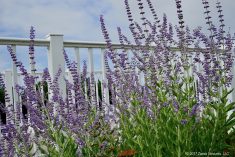 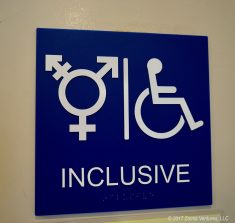 We liked that P-town was very inclusive 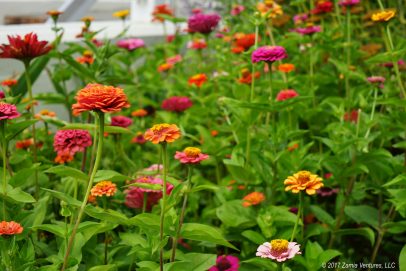 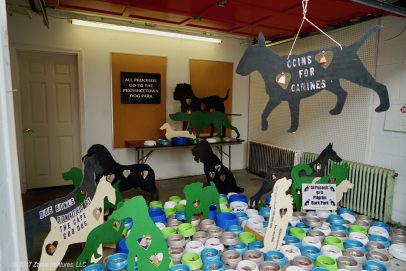 3 thoughts on “Cape Cod: An Overcast Day in Provincetown”